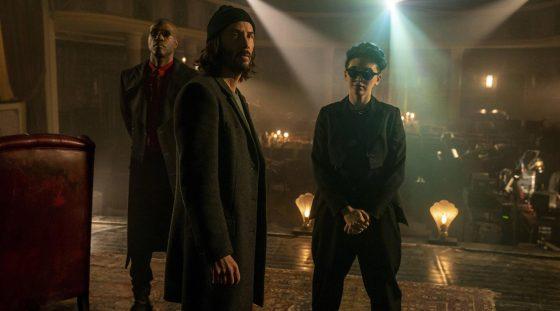 18 years since the war between machines and humans seemingly came to an end in The Matrix Revolutions, Neo and Trinity return in the fourth entry in the franchise, The Matrix Resurrections, the final film of Warner Bros. grand experiment in day and day HBO Max releases that happened throughout 2021.

The Matrix Resurrections finds Neo (Keanu Reeves) back in his original persona of Thomas Anderson back in some version of The Matrix.  He’s a video game designer who is famous for creating The Matrix Trilogy, which is confusingly called a game but seems more like the original three Matrix movies when they just show footage from those films as “game footage”.  He gets flashes of his real-life as Neo but is assured by his therapist, played by Neil Patrick Harris, that they are just figments of his imagination.  The truth is revealed to him once again when a new group of human resistance fighters, led by Bugs (Jessica Henwick) arrives to free him from The Matrix anew.  The movie, especially the first act, is meta to the point of being a bit annoying as it discusses the original movies through marketing speak and how “game-changing” they were and it peaks with talk of Warner Bros demanding a new sequel…in the new sequel we are watching.  There are also many scenes or lines that are repeated verbatim, which plays into the movie’s ideas of loops and memory but it also shows flashes of the scene that is being referenced which feels a bit like they feel the audience is too stupid to remember.  For me, it’s a bit too much but thankfully after Neo returns to the real world, the movie calms down and becomes a proper continuation of the original trilogy.  There’s some fun world-building and you get to see the effects of Neo and Trinity’s sacrifice in Revolutions as the sides of machine and human are blurred with some programs and machines joining humanity to form a new community called IO while many humans are still happy to be subjected by the machines in The Matrix.  There are also upgrades to some of the ideas of the original Matrix trilogy, like new operator Sequoia (Toby Onwumere) being able to interact within The Matrix via a hologram and the use of mirrors as portals to quickly teleport around the globe.  There’s also a change to agents called the “bot swarm” that turns nearby civilians into essentially zombies, which is a clever way to turn the computer terminology of a bot attack into a visual representation but it also just also feels like typical zombie movie stuff and it doesn’t have the visual impact of the agents with their suits, earpieces, and sunglasses or the effect of them becoming anyone at any time.

Keanu is still the best and he gives a thoughtful and sad soul to this new/old iteration of Neo and the heart of the movie, like the heart of the original trilogy, is still his relationship with Trinity, played as excellent as ever by Carrie Ann Moss.  Jessica Henwick basically steals the movie as Bugs and her charisma and physical prowess just throws even more light on how much of a waste Iron Fist was when she could have been doing stuff like this.  Yahya Abdul-Mateen II brings a lightness and comedic tone to his new version of Morpheus, who is a program created by Neo to have elements of Morpheus and Smith and he makes the character his own in a way that’s fun to watch.  Jonathan Groff brings all the smarm to his new version of Smith and also makes the role his own that isn’t just an impression of Hugo Weaving but it feels like Smith’s role is just there out of obligation and not because there was a unique or exciting new idea for him.  He is just sort of there and his reasons and objectives are a bit vague and generic and it might have been more interesting to have another new villain on top of the mastermind who is revealed to be behind everything.

The Matrix, especially the 1999 original, redefined action cinema but in the decades that have passed, other movies have taken what that movie did and improved upon it.  The result is that, for me, while the action in Matrix Resurrections is pretty great overall, nothing in it is really mind-blowing or feels like a sea change for cinema.  Nothing in Resurrections is as good as Keanu’s other big franchise, John Wick, and because of the meta nature of the movie, some of the action is intentionally just reflections of scenes from the original movies, like a fight between Neo and Smith.  Neo has some new powers, mostly involving a sort of “force push” that lets him blast away enemies and missiles and there’s some stuff with the bot swarm idea late in the movie where people are jumping off buildings to be human bombs but none of it feels like it will go down in history like the lobby scene, the freeway chase or even the Burly Brawl.  The final action sequence also just sort of weirdly ends with an awkward cut that saps the tension and excitement that was building up.