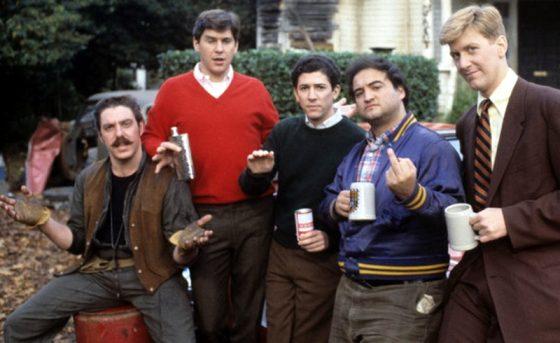 When you think about music from the 1978 comedy classic Animal House, you mostly think about its mix of iconic party songs like “Shout”, “Louie, Louie” and “Twistin the Night Away” but the movie’s actual theme song has gotten somewhat lost in the shuffle.  “Animal House” was written and performed by Stephen Bishop, who had a huge debut album two years earlier with Careless, which had two of his biggest hits, “On and On” and “Save it for a Rainy Day” but “Animal House” didn’t do as well, hitting #73 for a peak on the Hot 100.  Along with performing on the soundtrack, Bishop had a brief but memorable role in the movie itself as the folk singer whose guitar John Belushi smashes against the wall.  Bishop continued to work in the world of movies, contributing songs for movies like Tootsie (his huge hit “It Might Be You”), White Nights, The China Syndrome, Roadie, and The Money Pit and appeared in cameos in other John Landis movies like The Blues Brothers and Twilight Zone: The Movie.  The song came out slightly before the age of music videos, so there’s no video for “Animal House” but you can listen to it below.