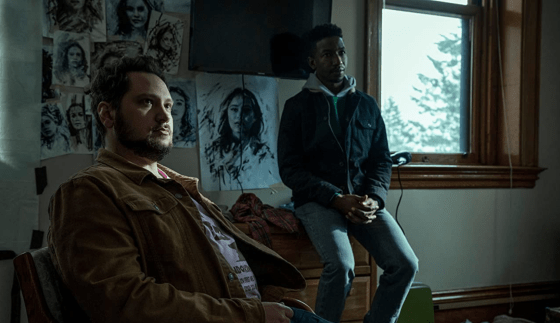 Arriving in a week on Netflix on January 14th, Archive 81 is their latest horror series that involves a set of mysterious and damaged VHS tapes, cults, time travel, and possibly more.  The show stars Mamoudou Athie as a video archivist named Dan Turner.  Dan accepts a job to try and restore a set of VHS tapes that were damaged in a fire decades ago and the damage to them is so extensive, they cannot be moved and Dan needs to go to a remote facility to begin his restoration.  He learns from watching the tapes that they are from a reporter/documentarian named Melody Pendras (Dina Shihabi), who was investigating strange occurrences in an apartment building back in the 90s.  As Dan learns more, strange things start happening to him and the fates of them both become intertwined.  It seems interesting, even though it’s a bit of a grab bag of all kinds of horror thrown into one show from the VHS series to cult horror to maybe demons, time travel/time loop stuff, or something like Last Night in Soho?  James Wan is one of the producers of the series and it’s based on a popular podcast series. You can check out the trailer below.