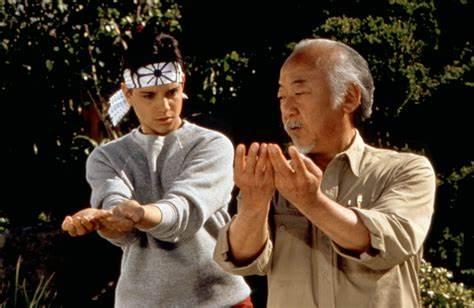 Making it’s grand return to the Karate Kid universe via a special Cobra Kai Season 4 guest star, “The Moment of Truth” was featured in the original movie but was overshadowed by the franchise’s more beloved musical entry, “You’re the Best” by Joe Esposito.  Hot off “Eye of the Tiger” from Rocky III in 1982 but with a new lead singer, Jimi Jamison of the band Cobra (how appropriate!), Survivor was asked to make a song for 1984’s The Karate Kid and “The Moment of Truth” was born.  Weirdly enough, “You’re the Best” was originally pitched to Rocky III and also Flashdance and was turned down by both movies before it became famous in The Karate Kid.  “The Moment of Truth” was released as a single and reached #67 on the Billboard charts.  Survivor also made a music video which features them in Japanese themed park while clips from the movie are intercut and you can check it out below.