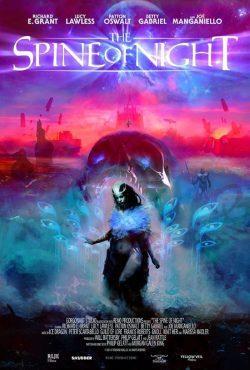 A dark age falls on the world when a mystical plant is discovered, granting those with a greed for power to untether their desires. A perilous force grows across the lands, striking down kingdoms and the innocent to a great evil. A few will stand against the rising threat to prevent the total corruption of mankind.

Set in a world of sword and sorcery, The Spine of Night is a mature animated film with inspirational nods to fantasy and science fiction classics. Using a mix of hand-drawn rotoscope animations on top of lush backgrounds, the visuals bring a great mix of retro and modern aesthetics. The movie is rounded out by an all-star cast of familiar fantasy actors like Lucy Lawless, Richard E. Grant, Patton Oswalt, and Joe Manganiello.

The Spine of Night is told in interconnection segmented tales, that each follows an overarching plot about a mysterious plant known as the bloom and its maniacal wielder, Ghal-Sur. When the witch queen Tzod (Lucy Lawless) traces the origin of the bloom to a mountain top, she is met with an aging guardian (Richard E. Grant) who questions events of the world that brought her to his watch.

The initial tale follows Tzod’s as one of the wielders of the bloom. She led a community of people in the swampland where she used her powers to protect them from outsiders. However, she was captured by Lord Pyrantin (Patton Oswalt), who desired the bloom’s power. A young scholar Ghal-Sur (Jordan Douglas Smith), was sent to record Lord Pyrantin but found himself imprisoned by protecting Tzod. They are saved when Tzod unleashes her fury thru the bloom, but it causes a cascading ripple effect when Ghal-Sur is corrupted by the allure of the bloom’s power.

Philip Gelatt and Morgan Galen King really lean into the ultra-violent and skimpily dressed side of the fantasy genre. There is unabashedly use of gore and nudity with each segment that ramps up as the movie unfolds. Limbs are chopped off and heads are split open, and a lot of people get vaporized. At times some characters don’t even get a chance to put on a metal-clad bikini top or tasteful codpiece before they meet their end. Gelatt and King also wrote stories for Love, Death and Robots, and that familiar writing of bleak and grim stories are present here.

Gelatt and King’s scope of The Spine of Night is very epic, a story that spans generations, but the choice of pacing seems to be a little off-balance at times. Some segments are heavily focused on the visuals, with small delivery on the plot to know new characters. At times, it’s interesting that characters just appear to fulfill one part of the story without much consequence. It fits narratively with how small certain things will appear on a larger scale. It’s nothing that takes away from the watching experience, but some parts feel a little unsatisfying when there are abrupt conclusions to the stories. 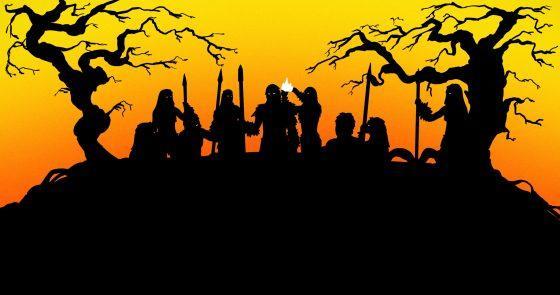 While The Spine of Night doesn’t reinvent the genre or the art style, it still delivers a solid combo of a grand story with eye-catching visuals that will draw in attention. It definitely works best for Dungeons and Dragons fans and film nerds that appreciate the handcrafted rough details from rotoscope animations, which goes double for Ralph Bakshi fans. The all-star cast of actors gives a great performance that easily immerses the characters. Richard E. Grant had a particularly stand-out performance for me as the old guardian, who delivers somber tones of a weary warrior. So if you are in the mood for a mature fantasy flick, hide the kids and break out the mead for a viewing of The Spine of Night when you get the chance.

The Spine of Night was released in the USA on October 29, 2021, and is available for rent or own on streaming at Amazon, Apple TV, Youtube, Redbox, and Google Play.