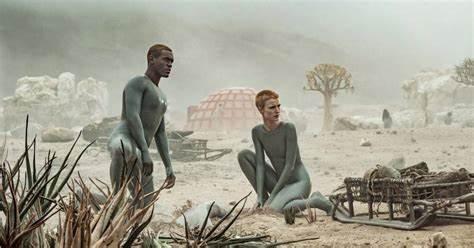 One of the first big HBO Max originals, the Ridley Scott-produced sci-fi series Raised by Wolves is back for Season 2 tomorrow but you can catch up on everything that happened in the first season in this edition of Up to Speed.  Set in the far future, the series follows Mother (Amanda Collin) and Father (Abubakar Salim), two androids tasked with rebuilding humanity on the planet Kepler-22b after Earth is destroyed in a war between the religious Mithraic faction and the Atheists.  A group of Mithraic survivors arrives on Kepler-22b led by Marcus (Travis Fimmel), who is really an Atheist soldier that used face-swapping tech along with his wife Sue (Niamh Algar) to take the place of a Mithraic couple with a slot on a vessel that was escaping Earth.  Tons of crazy stuff happened during the first season, which may explain why HBO Max didn’t just release one recap video, but a recap for each of the main characters individually as well.  Check them all out below and then check out Season 2.

Ridley Scott Comes to HBOMax with Raised by Wolves (Trailer)