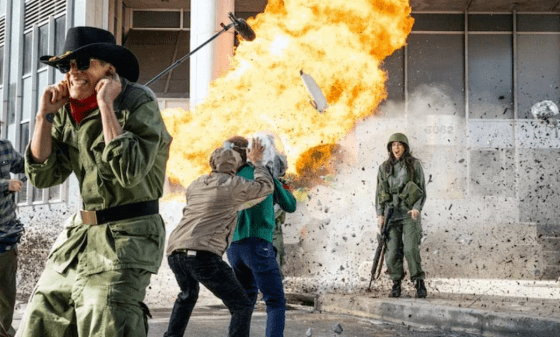 The Jackass crew managed to unseat Spider-Man at the box office with Jackass Forever taking the number #1 spot over the weekend.

Jackass Forever took in $23.5 million over the weekend, which was above predictions of around $20 million for the weekend.  It managed to top the opening of the original Jackass movie from 20 (geez!) years ago in 2002 but Jackass 3D is still the reigning Jackass champ with a $50.3 million opening back in 2010.  The movie only opened in Australia outside the domestic market and only took in $1.7 million, so Jackass Forever has a worldwide total of $25.2 million

Moonfall took second place with $9.8 million, which seems like a disastrous start for a disaster movie that cost over $150 million to make.  It’s Roland Emmerich’s worst wide-release opening ever, even lower than Universal Soldier, which made just over $10 million in fewer theaters back in 1992.  The movie hasn’t really opened anywhere internationally yet, so it seems like its only hope may be that the international crowd is looking for more of a stupid disaster movie than domestic audiences.  The Cinemascore and Rotten Tomatoes scores seem to bode terribly for Moonfall’s staying power and don’t be surprised if it nose-dives this coming weekend.

Spider-Man: No Way Home dropped to its lowest spot since opening in December, dropping to #3 with another $9.6 million, almost beating Moonfall.  It has $748.9 million domestic and is currently #4 on the All-Time domestic chart, inching closer to overtaking Avatar.  Worldwide, Spider-Man has $1.77 billion and is in sixth place behind Avengers: Infinity War, which has $2.048 billion

Scream and Sing 2 rounded out the top 5, with both movies holding strong from last weekend, especially Sing 2 which only dropped 10% from last weekend and has just shy of $300 million worldwide.

The Per Theater average went to The Worst Person in the World, a potential international Oscar contender and recent Sundance hit, which made $34,606 in each of the 4 theaters it played in over the weekend.