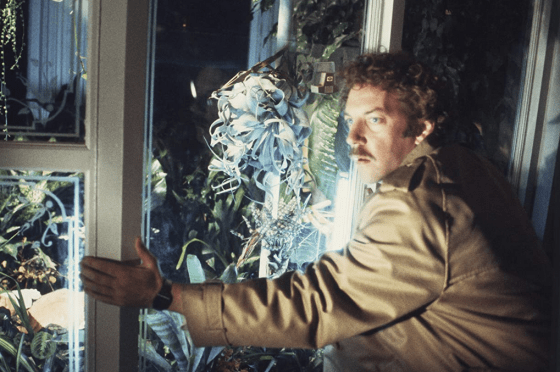 It seems like every decade or so there’s a new version of Invasion of the Body Snatchers but the 1978 version is still one of the best.  All versions of Invasion of the Body Snatchers go back to the 1955 novel The Body Snatchers by John Finney and the 1956 film version and the 70s version was a remake of the 50s movie but, much like The Thing a few years later, the remake is considered as good, if not superior to the original.  Donald Sutherland stars as Matthew Bennell, who works for the San Fransisco Health Department and starts to realize, along with his colleague Elizabeth Driscoll (Brooke Adams) that an alien invasion is occurring where strange plants are growing duplicates of humans while they sleep, replacing whoever the duplicate is based on with an emotionless copy.  Jeff Goldblum, Leonard Nimoy, Veronica Cartwright, Robert Duvall, Art Hindel, and Kevin McCarthy (who starred in the 56 version) co-star and the movie was directed by Philip Kaufman, who also directed The Right Stuff and the Michael Crichton adaptation Rising Sun along with co-writing Raiders of the Lost Ark.  The movie was hit at the box office despite a more limited release and made almost $25 million after debuting in December of 1978 and it’s since been considered one of the greatest horror/sci-fi movies ever made and one of the best films ever made period.  You can watch the entire movie below thanks to YouTube.