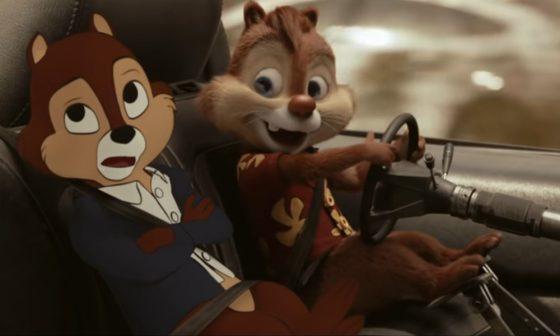 One of the staples of the 90s Disney Afternoon, Chip ‘n Dale: Rescue Rangers is coming back with The Lonely Island at the helm for a “comeback” movie arriving on Disney+ in May.  Andy Samberg and John Mulaney star as Chip ‘n Dale, 30 years after their cartoon series made them worldwide stars.  When one of their former co-stars (seemingly Gadget) disappears, the duo must reunite and solve the mystery.  Kiki Layne, Will Arnett, Eric Bana, Seth Rogen, Keegan-Michael Key, and JK Simmons co-star, and Akiva Schaffer, who directed The Lonely Island’s Hot Rod and Popstar, is directing the movie.  The movie is much weirder and more interesting than I think a lot of us were expecting when we heard there was going to be a Rescue Ranger reboot as it’s extremely meta and commenting on the world of animation in general, including jabs at Cats and the atrocities created by Robert Zemeckis and Dale getting “CG Surgery” to look like a modern animated character while Chip remains his old 2D self.  There also looks to be a slew of cameos from characters like MC Skat Kat, Roger Rabbit, My Little Pony, and more.  The movie hits Disney+ on May 20th and you can check out the trailer below.

The MCU Explores the Multiverse With What If? (Trailer)