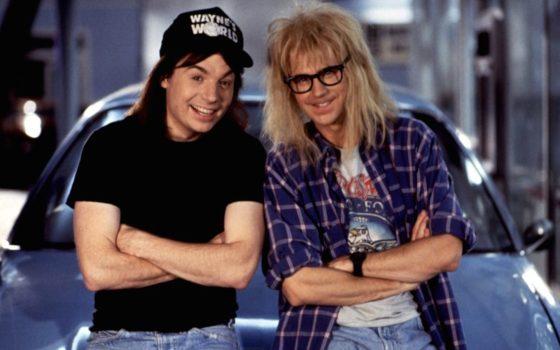 Celebrating its 30th anniversary this week, Wayne’s World is a 90s comedy classic that is still as great today as it was when it was first released.  Based on the series of SNL skits starring Mike Myers and Dana Carvey and directed by Penelope Spheeris, Wayne Campbell and Garth Algar made the transition to the big screen in triumphant fashion as they sell their rights to their local cable access show to a sleazy network executive (Rob Lowe), who wants to suck out the show’s soul to please big-time sponsor Noah’s Arcade.  Wayne also romances rocking vocalist, bassist, and all-around badass Cassandra Wong, played by Tia Carrere, while Garth gets into his own strange romantic entanglement.  So many of the movie’s bits and jokes have become iconic, like the Bohemian Rhapsody sequence that pushed Queen back into the zeitgeist. The movie was a massive success with critical acclaim and becoming the 8th highest-grossing film of 1992 and it’s still the highest-grossing film ever based on SNL.  The sequel, Wayne’s World 2, debuted the following year but couldn’t match the original’s box office and was less well-received by critics.  You can check out the entire movie below thanks to YouTube.

Know Your “That Guy”: Brian Doyle-Murray