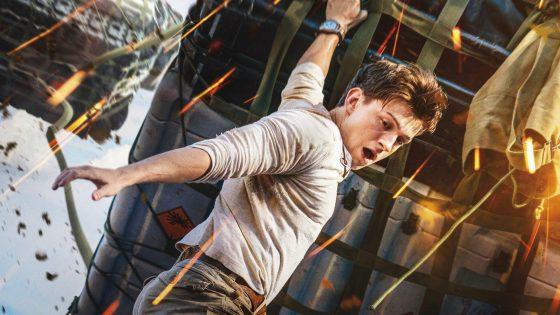 For a while, it seemed like the film version of the excellent Naughty Dog game series Uncharted was going to be lost in production hell, with multiple directors and actors cycling in and out for years.  The movie finally came together and is out now in theaters and delivers solid entertainment but fails to come close to the level of character and excitement the games delivered.

Tom Holland stars as Nathan Drake, a street smart young thief living in New York City making a living as a bartender while swiping small valuables from patrons.  He’s approached by an experienced treasure hunter and thief Victor Sullivan (Mark Wahlberg) to go after Magellan’s lost gold, an ancient treasure that could be worth billions if found.  Sully also worked with Nate’s long-lost brother Sam Drake (Rudy Pankow) and it was the Drake brothers’ lifelong dream to find the treasure.  Competing with Nate and Sully is the ruthless Santiago Moncado, who believes the treasure is his family’s by rights and will do anything to get it, including employing a formidable army of mercenaries led by Jo Braddock (Tati Gabrielle).  The movie is a prequel to the games but fans of the game will definitely notice that it strangely pulls a lot from later games in the series, specifically Uncharted 3 and 4.  One of the biggest action sequences is almost a shot for shot recreation of a sequence from 3 and the Sam Drake stuff and the overall plot of lost gold on a tropical island is reminiscent of the pirate bonanza from Uncharted 4.  Because Uncharted was borrowed liberally from Indiana Jones and pulp adventure and the movie is an adaptation of the games, it’s like a copy of a copy and there’s nothing in the plot that you can’t predict if you’ve seen similar movies before.  All the double-crosses and reveals can be seen from miles ahead so it’s really left to the actors and set pieces to keep things interesting.  The movie does wisely not engage in any supernatural elements like the first three games featured and it probably would have definitely thrown casual movie fans for a loop to suddenly have monsters or super-powered humans running around and Uncharted 4 and Lost Legacy didn’t have them either are arguably the two strongest entries in the franchise.

Tom Holland brings all the charm and humor he brings to Spider-Man to Nathan Drake and is just fun to hang out with and he does a great job with action sequences and there’s lots of parkour flair, flips, and other physicality that he brings to the action.  He also does a great job with the banter and wisecracks that you’d expect from Nate. If you’re comparing to the games, Mark Wahlberg is a terrible Sully but if you can get past that, he’s fine, especially if you enjoy his default, kind of dickish style of acting.  The Sully from the games was a warm and likable presence and you felt the surrogate father/son dynamic between him and Nate.  Wahlberg feels like he’s more like Nate’s dirtbag uncle or older brother and while his turn to caring more about people than money is completely predictable, the movie doesn’t really do a lot to build it up.  It’s great to have Chloe Frazer in the movie and Sophia Ali does a solid job but she’s kind of a generic femme fatale style character.  It feels a bit like how she was in Uncharted 2 but there’s been so much more character development and you even got to play as her in Lost Legacy, so the movie version just feels kind of surface level and lacks the depth fans of the games would expect or want.  Tati Gabrielle and Antonio Banderas both do a great job as the villains even though, again, their fairly generic as well.  Gabrielle has a great intimidating presence and has some great fight and action moments but she’s also clearly inspired by Nadine from Uncharted 4 and Lost Legacy, so it’s a bit strange that they came up with a completely new character for the movie.  If you were a fan of Elena, she’s nowhere to be found in this movie, although the movie seems to set up that there may be a sequel that will be a take on the first game’s plot, so maybe she’ll show up then.

There are some fun set pieces throughout Uncharted but one of the best ones, where Nate is hanging off cargo containers falling out of a plane, is literally copied and pasted from the games, so if you played it, whatever the movie does could never live up to you actually playing and doing it.  The final action sequence is unique to the movie and while it’s completely ridiculous, it feels in line with something that would have been in the game and also does a great job of paying homage to sort of swashbuckling pirate movies, just with ships dangling from helicopters.  There’s also an extended sequence that is doing the slower, puzzle-based sequences from the games but it does feel like it goes on too long for a movie and probably could have gotten some bits condensed or edited down although I do appreciate the effort to have both sides of the games included.  There’s a little bit but not a whole sequence of Nate climbing something, which is also a huge element of the games but maybe if there’s a sequel Tom Holland can do some mountain climbing.  One minor complaint as a huge fan of the games is that the movie doesn’t feature the iconic Uncharted theme until the end credits, with little bits and pieces teased earlier and through the climax.  The great Ramin Djawadi does the score and came up with his own movie theme, but it, unfortunately, pales next to the game’s actual theme.  On the flip side for fans of the games, there’s an extremely fun cameo from Nolan North, who voices Nate in the games.

Uncharted is a perfectly enjoyable action/adventure movie but if you’re a huge fan of the games, you’ll probably find a lot of it lackluster compared to the characters and set pieces you actually get to take part in.  Tom Holland is a fine Nate and is as charming and charismatic as ever and if you can get over how woefully miscast Mark Wahlberg is as Sully, he’s doing his usual schtick which is mostly fun here but nothing like the Sully we know and love from the games.  It’s comparable to the Alicia Vikander Tomb Raider movie, which was also a perfectly fine action/adventure but the games are the superior version in both cases and if, for some reason, you’ve never played the Uncharted games, stop what you are doing and check them out as soon as possible.

Uncharted Jumps From Playstation to Theaters in February (Trailer)