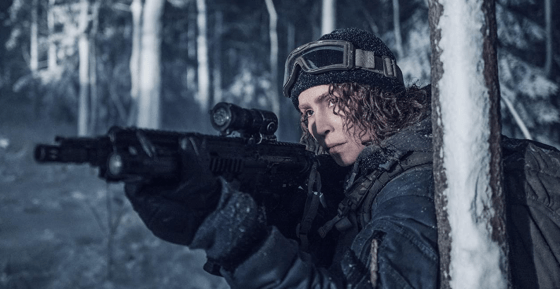 Noomi Rapace has been a staple of Netflix’s original movies with stuff like Close, Bright and What Happened to Monday and she’s back in March with Black Crab.  A Swedish action thriller from director Adam Berg, Black Crab is set in a world ravaged by climate change and war with Rapace starring as Caroline Edh, a former speed skater turned soldier.  When an archipelago that divides the warring factions becomes completely frozen over, Rapace is one of six soldiers sent on a covert mission across the frozen divide to recover a package from behind enemy lines that could end the war.  Edh also has personal reasons for going as her missing daughter has been found in an enemy refugee camp.  Director Adam Berg is a music video and commercial director making his feature-length debut and he also produced Amazon’s Tales from the Loop series.  Black Crab is out on March 18th and you can check out the trailer below.