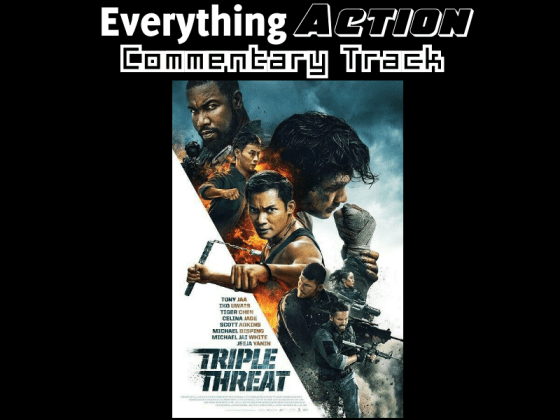 To celebrate the start of the Year of the Tiger this month, Zach, Chris, and special guest Addam watched 2019’s Triple Threat, which features martial arts action star, Tiger Chen.  Chen co-starred along with Tony Jaa, Iko Uwais, Michael Jai White, Scott Adkins, Michael Bisping, and JeeJa Yanin in a martial arts/action extravaganza directed by Jesse V. Johnson, who previously directed Scott Adkins in movies like Savage Dog, The Accident Man and The Debt Collector.  Uwais is ostensibly the main character, Jaka, whose family is killed when a group of ruthless mercenaries storms a secret MI6 black site that Jaka is working security at to rescue their captured leader Collins (Adkins).  Jaa and Chen are local guides who bring the mercs to the jungle camp but are betrayed and left for dead.  Jaka plays both sides to try and get revenge but ultimately joins forces with Jaa and Chen in a final battle against the mercenary team.  If you’re a fan of VOD action, there are tons of dream fights and awesome action, even if the plot is a little thin.  The guys talk about the seeming homages to movies like Predator and Terminator, the vague motives of the main villain behind the scenes, if the movie was sponsored by Sapporo beer, and more.  Triple Threat is available on Netflix and you can sync it up and watch it along with the Everything Action crew.