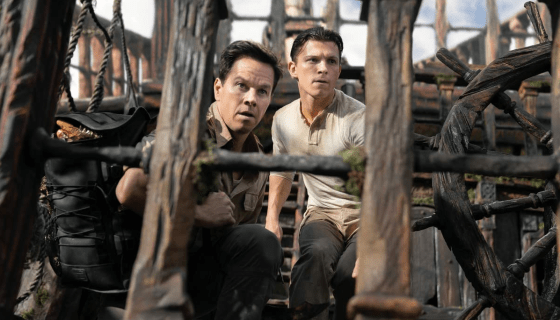 With The Batman arriving this coming weekend, Uncharted remained at the top of the chart for one more week as the only new releases were very niche and didn’t even crack the top 5.

Uncharted brought in another $23 million, bringing it to $83.1 million domestic for two weeks out and $226 million worldwide.  It’s the third highest-grossing film of 2022 worldwide so far behind Chinese films The Battle of Lake Changjin II and Too Cool to Kill.  Uncharted also had a strong hold, dropping less than 50% from last weekend with a 48% change between last weekend’s opening and this weekend.

Dog also had a strong hold and stayed in second with another $10.1 million.  The movie has $30.8 million so far for two weeks out and $32 million worldwide.

The rest of the top 5 was unchanged with Spider-Man: No Way Home, Death on the Nile, and Jackass Forever staying in third, fourth, and fifth respectively.  They all had strong holds as well, all of them below 40% between last weekend and this weekend.  No Way Home has $1.85 billion worldwide.

Further down the list, the weekend’s new releases were sitting at 8th and 9th.  The Foo Fighters’ Studio 666 took in $1.5 million, which is less than half of what their buddies Tenacious D made when The Pick of Destiny opened in 2006 in fewer theaters.  It seems like it only drew in Foo Fighters fans and didn’t expand out to general horror/comedy fans.  Cyrano was in 9th place and was playing in less than 1,000 theaters. At one time a possible Oscar contender, the movie only garnered one nomination for Best Costume Design and it only brought in $1.4 million for the weekend.  It also didn’t really bring in international audiences with only around $1 million so far internationally.  For director Joe Wright, the opening for Cyrano was between his take on Pride & Prejudice and Atonement.

The Per Theater average actually went to one of the greatest films of all time, The Godfather, which had a special 50th Anniversary remaster that was playing in 156 theaters and took in $5,769 in each of those theaters over the weekend.  Uncharted was just behind it with $5,380 in each theater, although that was 4,275 theaters.