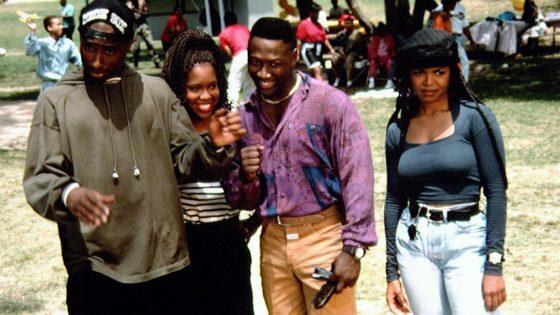 Following up his critical and commercial debut film Boyz N The Hood, director John Singleton wanted to put the spotlight on young Black women for the romantic road trip drama Poetic Justice.  The movie starred musical superstars Janet Jackson and Tupac Shakur as Jackson’s hairdresser/poet Justice is mourning the death of her boyfriend but is convinced by her friend Iesha (Regina King) to make a trip from Los Angeles to Oakland with her and her boyfriend Chicago (Joe Torry), which Justice accepts because there is a hair show she is looking to attend.  Unknown to Justice, the group is traveling via mail van, as Chicago and his co-worker Lucky (Tupac) work for the post office.  The group makes a few stops along the way, like a family reunion BBQ and a carnival, and Lucky and Justice grow closer along the journey.  With two huge musicians in the leads, the soundtrack was obviously going to be a major part of the movie as well and both Tupac and Janet Jackson had songs, “Definition of Thug Nigga” and “Again” respectively, with Jackson’s “Again” being nominated for an Oscar and a Grammy Award.  The soundtrack also had the first official appearance of Usher with “Call Me a Mack” the singles “Get It Up” by TLC and “Indo Smoke” by Mista Grimm.  Stevie Wonder’s song “Never Dreamed You’d Leave in Summer” was also featured heavily in the movie as well.  The soundtrack hit #23 on the Billboard Hot 200 and #19 on the R&B/Hip Hop Albums charts and was certified Gold, selling over 500,000 copies.  A bunch of the songs from the soundtrack got official music videos and you can check them out below.