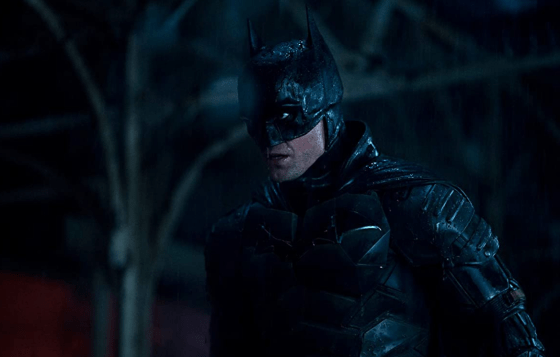 After years of anticipation, the newest incarnation of the Dark Knight hit theaters this past weekend and director Matt Reeves has delivered one of the best versions of Batman that feels like the cinematic version of the best Batman graphic novels.

Robert Pattinson star as Bruce Wayne/Batman, who has been The Batman for two years and has formed an alliance and budding friendship with the GCPD’s Jim Gordon (Jeffrey Wright).  Batman’s skills are put to the test when a sadistic serial killer, The Riddler (Paul Dano), begins killing high-profile members of the Gotham City government and providing evidence of their and others’ widespread corruption.  During his investigation, Batman joins forces with Selina Kyle, a cocktail waitress at the mob-infested Iceberg Lounge who moonlights as a cat burglar who is looking to find out what happened to her friend Annika.  The Batman feels like the best Batman graphic novels, like The Long Halloween for instance, without specifically adapting any one particular story arc and allowing Matt Reeves to create his own dark, grimy and violent take on the Batman universe.  This is the first movie that truly allows the World’s Greatest Detective moniker to take center stage as the story unravels as more of a Se7en or Zodiac-style mystery and relies less on huge action set pieces.  There is still plenty of action but the characters and plot are the main focus.  Robert Pattinson is an excellent Batman and gives so much with just his facial expressions and his Bruce Wayne truly feels like a shell that is only there to hide what his true identity is now, which is being Batman.  Jeffrey Wright adds some much-welcomed levity as Jim Gordon, whose interactions with Batman let you feel their alliance and the trust that has built between them in the two years since Batman first appeared.  Zoe Kravitz is a fantastic Selina Kyle and does a great job of embodying the constant pull between her darker impulses and the justice that Batman represents and she and Pattinson have excellent chemistry.  Colin Farrell delivers one of the most transformative performances I’ve ever seen as the combination of makeup and vocal performance make him completely vanish into the character of Oswald Cobblepot aka The Penguin, and he steals every scene he’s in with his puffed-up mobster bravado.  Paul Dano and John Turturro both deliver chillingly terrifying performances, with Dano’s Riddler being the more theatrical as his character leaves videos and live streams that usually end in psychotic ramblings while Turturro oozes cold menace as Carmine Falcone, whose utter certainty that he controls the entire city make him believe he can do whatever he wants and who subtly implies terrible consequences for anyone who questions or goes against him.  The only person who gets short-shrift is Andy Serkis, whose Alfred only has a few scenes and doesn’t really get a chance to really show what sets him apart from prior versions of the character.

The Batman is almost three hours long but it never feels its length, except for possibly toward the end as it seems like the movie hits a plot climax but then continues on for a big finale.  The movie’s pacing keeps you engaged and the mystery of who the Riddler is and what he’s trying to achieve keeps delivering new reveals or twists and the characters and their various interactions are thoroughly engaging as well.  The score by Michael Giacchino also helps keep things engaging and thrilling with a stellar new Batman theme that comes in at the perfect times throughout the film to punctuate certain scenes.  The sound design is excellent as well, especially in regards to the intimidation and fear Batman causes.  There are multiple scenes where you just hear Batman’s footsteps thudding out of the shadows before he appears and it does a great job of building anticipation and showing his effect on the criminals of Gotham.  There’s a similar thing with the new Batmobile later on where you hear its engine for the first time and it just revs louder and louder until things explode in the movie’s incredible car chase sequence.  There aren’t a lot of huge action set pieces like you might have seen in prior Batman movies but there’s consistently solid action throughout, including lots of hand-to-hand fights and the aforementioned car chase.  You could pull out the Dark Knight semi-truck chase or the BvS warehouse raid for better individual action Batman action but what’s here combined with the engaging mystery and the performances make The Batman stand among the best incarnations of the character.

The Batman is a fantastic take on Batman that any fan of the character will most likely love.  It nails the tone, the characters, and the action and presents a dark, gritty and violent Gotham that feels inspired by some of the best comics and graphic novels featuring the character.  It also is the first Batman movie to truly allow Bruce to be a detective and the mystery presented in The Batman is intriguing and engaging with excellent villains driving the action.  This is one of the best Batman movies ever made, easily standing alongside the likes of The Dark Knight and the Tim Burton original.