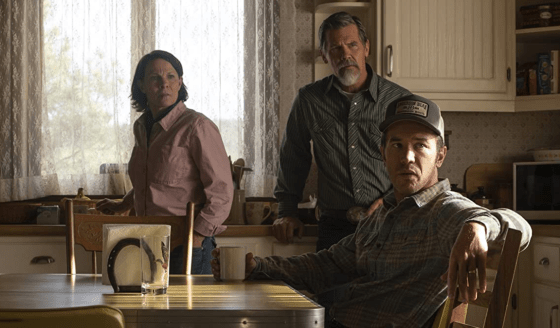 Yellowstone is one of the biggest shows around right now and it makes sense that other networks and streamers would be looking for something similar.  Outer Range looks like it will have all the family ranching drama of Paramount’s ratings champ but with some sort of sci-fi/horror twist to make it stand apart.  Josh Brolin stars as Royal Abbott, whose family owns a ranch in the wilderness of Wyoming.  Dealing with the disappearance of a family member and a greedy rival family trying to buy their land, a mysterious black void opens up in one of the Abbotts’ pastures that may have some sort of supernatural origin and effect on the Abbotts and the nearby town.  Lili Taylor, Imogen Poots, Tamara Podemski, Lewis Pullman, Noah Reid, and Shaun Sipos co-star with Will Patton, Mathew Maher, MorningStar Angeline, and Matt Lauria in recurring roles.  The show was created by Brian Watkins and it’s his first-ever series or project in general, having not worked on anything else, at least according to IMDB.  The series debuts on April 15th and you can check out the trailer below.