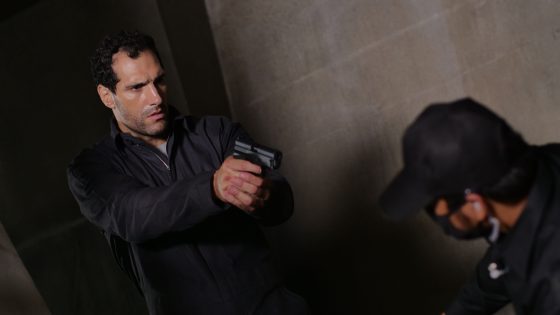 Out now on Digital and DVD from Lionsgate, Invincible has a cool premise similar to something like Bloodshot or Universal Soldier and solid stars but squanders the opportunity for cool action and has a meandering plot that has way too much downtime.

Johnny Strong and Marko Zaror co-star with Strong playing Cam Devore, a bodyguard for industrialist Leor Teska (Paul Kennedy).  Teska has developed revolutionary medical tech for artificial limbs but has been developing nanobots that can make the person they are injected into basically invulnerable.  Zaror plays Brock Cortez, the leader of a military squad that is ambushed on a rescue mission and critically injured.  Cortez is given the nanobot treatment but he escapes the facility and begins to go on a rampage across Thailand as the nanobots seem to be affecting his mental state.  Cam tries to stop Cortez but is critically injured himself, leading to him also receiving the nanobot treatment.  One of the biggest issues with Invincible is the meandering and slow pacing of the plot.  There doesn’t seem to be a lot of urgency from anyone involved in tracking down Cortez, which saps the movie of energy and tension when it should be a constant, tense chase/cat and mouse battle between Cam and Cortez.  There’s also tons of downtime with a completely uninteresting and cliche plot where Cam tries to reconcile with his wife Michelle (May Myat Moe), who has filed for divorce.  The entire plot seems to exist just to try and raise the stakes for the climax but it doesn’t work at all.  Michael Paré also has almost literally nothing to do except appear in a few scenes on the phone.  There are also some strange shooting and technical choices that stand out more as your attention isn’t being held by the plot or action.  For instance, there’s a scene shot on a private jet but, in a typical movie, you would shoot on a set that’s bigger than a normal jet to be able to have the camera and actors comfortably spaced out.  Invincible shoots on an actual private jet and it’s so ludicrously cramped that it completely distracts from anything going on in the scene.  The infamous Wych Kaosayananda aka Kaos was the director of photography, so that explains some of the bizarre choices and choppiness.

The main attraction of Invincible should have been the fights between Johnny Strong and Marko Zaror, especially since they both eventually have super strength and abilities thanks to the nanobots, but there are too few interactions between them and the fights are brief and uninspired.  The movie was almost certainly shot toward the height of Covid, so maybe that had an effect on what they could actually accomplish, but there’s nothing interesting or unique about the fights.  There are a couple of cool, solid moments throughout, but when you’ve seen what someone like Zaror can do with an incredible partner like Scott Adkins and a director like Jesse V. Johnson or Isaac Florentine, it seems like a wasted opportunity.  Zaror fares the best in the movie, getting the most fights and a few badass moves and moments and putting out a decently intimidating vibe but he just wanders around Thailand for basically the entire movie, getting into random fights and casually avoiding the police and Cam’s effort to find him.  The action is also full of digital effects, like CG blood, and other elements from the cheaper end of movies in the VOD action genre.  It doesn’t feel Money Plane cheap but it definitely doesn’t have the visceralness of practical effects and more in-depth choreography of the best of this category of action.

Invincible had a cool premise and Johnny Strong and Marko Zaror have been bad-ass and solid in previous movies but the pacing and lackadaisical nature of the plot and uninspired action that doesn’t live up to the opportunities of the premise and the fights and action are too brief throughout and separated by too much uninteresting drama that has nothing to do with the main plot.  I would definitely recommend checking out Zaror in Undisputed 3 or Savage Dog if you want to see how brutal and badass he can be and probably skip this one.

Check Out An Exclusive Clip from Invincible