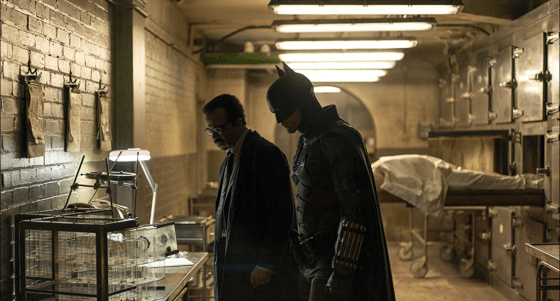 The Batman remained at the top of the box office charts for the third weekend in a row but there was strong competition from the latest big anime movie that hit domestic theaters.

The Batman took in another $36.7 million, bringing it to just over $300 million domestic and just under $300 million worldwide.  It has a global total of $599.6 million.  It’s currently the 2nd biggest movie of the year globally behind China’s The Battle of Lake Changjin II.  Speaking of China, The Batman debuted there but rising Covid cases caused a lackluster turnout and it only added $12.1 million to its total from the Chinese market.  The Batman is closing in on Batman v Superman and Joker’s domestic box office totals but with strong competition starting to come back into theaters in the next few weeks, it probably will be hard-pressed to get close to and topping The Dark Knight Rises, which made over $448 million domestic.

Second place was another strong showing for anime at the domestic box office with Jujutsu Kaisen 0: The Movie, which made $17.6 million over the weekend.  The movie has $148.3 million worldwide.  Demon Slayer The Movie: Mugen Train had a bigger opening but Jujutsu Kaisen 0’s opening proves that anime is here to stay for big theatrical releases domestically.

Uncharted dropped to third place with $7.8 million, bringing it to $125.7 million domestic and over $337 million worldwide.  It’s now the fifth-biggest video game movie worldwide of all time and the fourth biggest movie of 2022 worldwide.

X and Dog rounded out the top 5.  The former opened with $4.4 million, which puts it between Midsommar and Zola for A24 and the biggest opening ever for director Ti West, although all of his previous films had limited releases.

Further down the list, The Outfit opened to $1.49 million and took 8th place while Indian film The Kashmir Files took 9th place with $1.48 million.  The Sandra Oh horror movie Umma opened outside the top 10 with $915,290.

The Per Theater average went to Ahed’s Knee, an Israeli film that played in 1 theater and took in $16,980 for the weekend there.