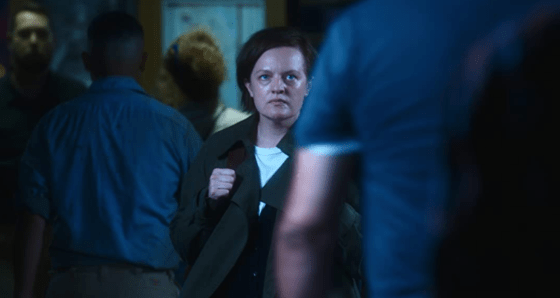 If you’re a fan of crime dramas, Apple TV+ and FX/Hulu are putting out two new ones within a day of each other at the end of April with Shining Girls and Under the Banner of Heaven, both of which have new trailers.

Shining Girls is based on the book by Lauren Beukes and stars Moss as Kirby Mazrachi, a Chicago newspaper archivist who dreamed of being a reporter until she was brutally attacked.  A side effect of her assault is that she seems to jump between realities, with different pets, different apartments, and different people in her life.  A detective, played by Wagner Moura, approaches her and requests her help when a woman is found murdered and it seems like the same killer that almost murdered Kirby.  Jamie Bell, Phillipa Soo, and Amy Brenneman co-star, and it will debut on April 29th on Apple TV+.

Over on Hulu under the FX banner, Andrew Garfield stars in Under the Banner of Heaven, which looks like it will hopefully satisfy True Detective fans.  Based on true events and the book by Jon Krakauer, Garfield plays Mormon police detective Jeb Pyre, who is investigating the brutal murder of Brenda Wright Lafferty and her baby daughter in 1984.  Pyre’s investigation leads him to investigate the origins of his faith and some of the other Mormons in the area who may be involved.  Sam Worthington, and Daisy Edgar-Jones co-star, and the series begins on April 28th.