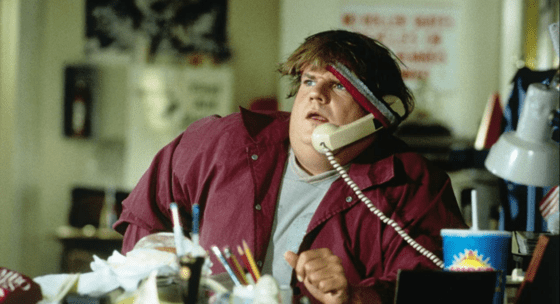 Coming out the year after the 90s classic Tommy Boy, Black Sheep continued Chris Farley’s run of comedy greatness and reteamed him with David Spade, although it was the pair’s final movie together.  Farley played Mike Donnelly, the well-meaning but bumbling brother of Washington gubernatorial candidate Al Donnelly (Tim Matheson).  Al’s campaign tries to convince Mike is a liability but Al decides to let Mike continue to help with the campaign but assigns campaign aide Steve Dodds (David Spade) to assist Mike.  Many wacky hijinks ensue as the campaign gets closer to election day, including run-ins with a crazed survivalist veteran played by Gary Busey and attempts to sabotage Mike and the campaign by the incumbent governor, Evelyn Tracy (Christine Ebersole).  The movie took in $32.4 million at the box office and reviews were mixed, with an especially brutal pan of the movie by Gene Siskel.  Tommy Boy is probably the more beloved of the Spade/Farley movies but there’s lots of fun stuff in Black Sheep as well and you can watch the entire movie below thanks to YouTube.