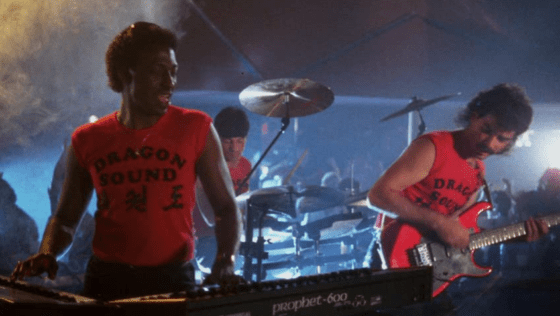 Lingering in obscurity after its initial release in the greater Orlando area in 1987, Miami Connection has become a beloved cult classic after it was rediscovered and released by Drafthouse Films in 2012.  Directed by, produced by, and starring Y.K. Kim, a Taekwondo martial artist who opened a string of martial arts schools across Florida, the movie is wonderfully insane and sincere as Dragon Sound, a rock band consisting of college martial arts friends, find themselves up against drug dealers, rival rock bands, and motorcycle ninjas, with their battles often resulting in horrifically violent deaths.  The soundtrack features the bangers “Friends” and “Against the Ninja” from Dragon Sound and it’s been featured on Rifftrax, Red Letter Media, and How Did This Get Made? among many other purveyors of awesomely bad movies.  If you’ve never seen Miami Connection, stop what you are doing and watch it below thanks to PopcornFlix on YouTube.

Action Hero of the Week: Mark