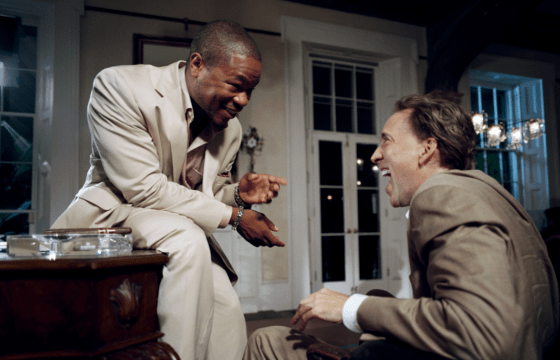 There are certain directors that are able to unlock the full power of Nicolas Cage and Werner Herzog is definitely one of them.  The duo teamed up in 2009 for one of the best (and craziest) modern Nicolas Cage movies, Bad Lieutenant: Port of Call New Orleans.  Although it shares a title with the dark 1992 Harvey Keitel movie Bad Lieutenant, Port of  Call New Orleans has nothing to do with that movie except that it’s about corrupt cops who abuse their power.  Cage plays Lt. Terrence McDonagh, who injures his back trying to rescue a prisoner trapped in jail during Hurricane Katrina.  Six months later, he is addicted to painkillers and any other drug he can get his hands on and abuses his power during arrests for personal gain.  When a number of immigrants from Senegal are found murdered, McDonagh gets the case and has to find his way through his drug-induced haze to solve the case.  The star-studded cast includes Val Kilmer, Eva Mendes, Xzibit, Shea Whigham, Brad Dourif, Fairuza Balk, Jennifer Coolidge, Michael Shannon, and Tom Bower.  There are some classic moments of unhinged Cage acting, including when he hallucinates seeing iguanas or that the ghost of a recently killed criminal is breakdancing in front of him, or when he threatens an elderly woman by cutting off the air from her oxygen tank.  The movie got critical acclaim but had a very limited release, peaking at just under 100 theaters showing it during its box office run.  You can check out the entire movie below thanks to FilmRise Movies on YouTube.