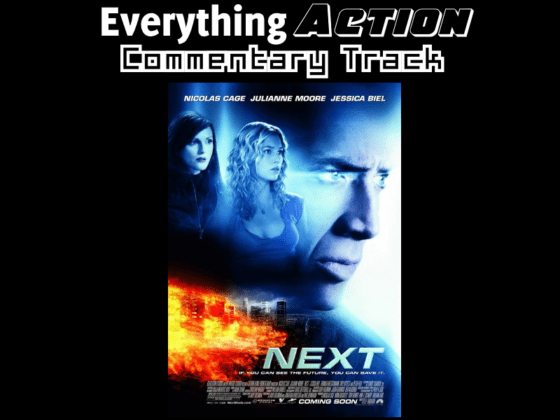 For the latest Everything Action Commentary, Zach, Chris, and special guest Addam looked into the future with Nicolas Cage for 2007’s Next

Very, very, very loosely based on a Phillip K. Dick story, Cage stars as Las Vegas magician Cris Johnson aka Frank Cadillac, who finds himself caught between international terrorists who have stolen a nuclear weapon and the FBI, who want to use his ability to see into the future to help stop the bomb from going off.  Cris is more interested in romancing Liz (Jessica Biel), who for some reason allows Cris to see further than his normal 2 minutes into the future if she is involved.  The guys try to figure out the fluctuating level of Cris’ abilities, the corny methods that work to pick up Jessica Biel, the amount of government resources being wasted by Julianne Moore’s FBI agent, the one scene cameo from the great Peter Falk, and more.  You can watch Next on HBO Max or via DVD/Blu-Ray and sync it up with the commentary below.

Everything Action Commentary: The Octagon