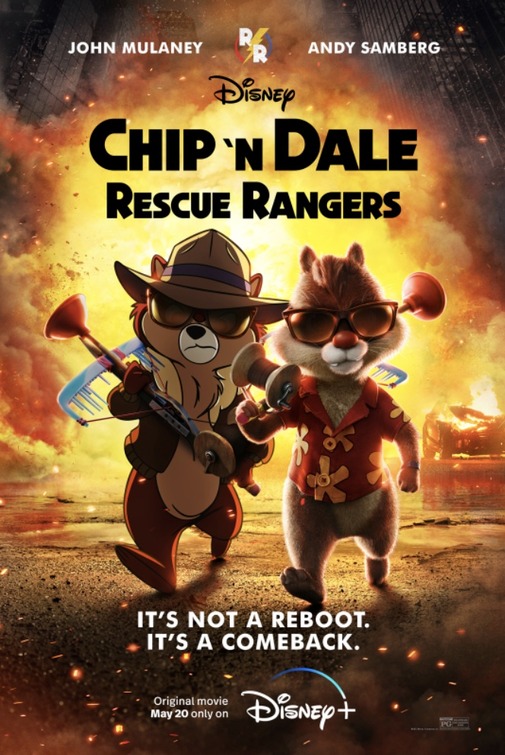 I think we were all caught off guard when the first trailer for the Chip n’ Dale: Rescue Rangers “comeback” trailer hit a few months ago and it revealed itself as basically the spiritual successor to Who Framed Roger Rabbit? (even featuring Roger Rabbit himself).  This new trailer lacks the surprise but still makes the movie seem like a weird and hilarious homage to the 90s classic filtered through The Lonely Island.  John Mulaney and Andy Samberg star as Chip and Dale, with Chip living a boring life selling insurance while Dale has gotten “CGI Surgery” and hits the nerd convention scene coasting on the success of their former show.  When fellow cartoons start disappearing, the duo reluctantly reteams and investigates who is behind the kidnappings and why.  New for this trailer is a look at JK Simmons’ Gumby style cop and just more of the cameos and nature of the world, where cartoons and humans live side by side.  Will Arnett, Kiki Layne, Eric Bana, Keegan-Michael Key, Tress Macneille, Seth Rogen, Chris Parnell, and Corey Burton co-star, and the movie was directed by Akiva Schaffer, whose last directing gig was the criminally underrated Lonely Island movie Popstar.  Chip n’ Dale is out on Disney+ on May 20th and you can check out the new trailer below.

The Rescue Rangers Are Back On Disney+ In May (Trailer)