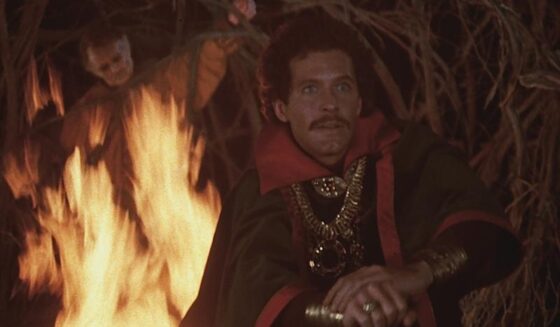 Before you head out to see the Multiverse of Madness in theaters this weekend, experience the 70s madness of the OG Dr. Strange movie.  Airing in 1978 on CBS, which was the home of The Incredible Hulk and The Amazing Spider-Man TV shows, Dr. Strange was a TV movie that was also a pilot for a potential TV series, which was not picked up.  Stan Lee served as a consultant while the movie was directed by Philip DeGuere Jr, who was mostly a TV writer and worked on shows like Simon & Simon, the 80s reboot of The Twilight Zone, Air America and more.  Peter Hooten starred as Stephen Strange, who is a psychiatrist in this universe, who must battle Morgan Le Fay, played by the late, great Jessica Walter, who is working for the evil entity known as The Nameless One.  She possesses one of Strange’s patients, Clea Lake (Anna-Marie Martin) in attempt to kill the current Sorcerer Supreme and unleash evil onto the mortal realm.  If you’ve seen The Incredible Hulk TV show, Dr. Strange has similar, cheesy vibes, although CBS gave it a pretty decent budget for a TV movie and Stan Lee said he actually had quite a lot of input into it and was friends with DeGuere Jr.  Airing opposite of the juggernaut miniseries Roots, Dr. Strange tanked in the ratings and received two VHS releases before Shout Factory! put it out on DVD in 2016 and on Blu-Ray literally just a week ago on April 26th.  You can watch the entire movie below thanks to Dailymotion.

Everything Action Theater: Hulk Vs.