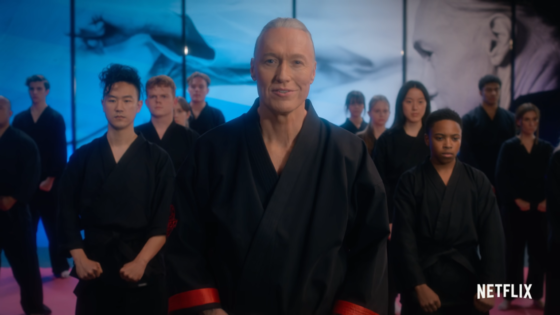 Following the 51st All Valley Karate Tournament, Cobra Kai reigns supreme and Terry Silver (Thomas Ian Griffith) has eliminated his old friend John Kreese (Martin Kove) to gain full control of the dojo and is looking to spread the message of No Mercy across the valley.  Daniel LaRusso (Ralph Macchio) looks to his old foe turned ally Chozen (Yuji Okumoto) for help to stop Cobra Kai and Silver once and for all while Johnny Lawrence (William Zabka) journeys to Mexico with his estranged son Robbie (Tanner Buchanan) to find Miguel (Xolo Maridueña), who is looking for his potentially dangerous biological father.  Season 4 left Cobra Kai off on some juicy threads and it looks like Season 5 will pick things up and hopefully keep the show at the same fun level it’s always been at.  The new season is arriving earlier than expected, the last few seasons have arrived around the end of the year but Season 5 will drop on Netflix on September 9th.  Check out the trailer below.