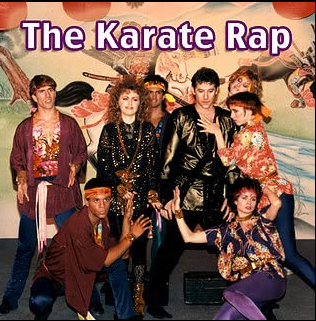 One of the greatest examples of terrible hip-hop ever put on film, The Karate Rap was the brainchild David Seeger and Holly Whitstock Seeger as a way to promote their karate prowess and their company, Samurai Studios Inc.  Filmed in 1986, everything about the video is wonderfully insane and terrible, from the overly intense karate demonstrations, the crazy lyrics (I train in my car/I’m a ninjar(?)), the geishas and everything else.  Eight year later, Samurai Studios took things to the next level by creating a ridiculous movie, Sister Sensei, which starred all the Seegers and seemed to take cues from the JCVD classic No Retreat, No Surrender as well as Rocky and everything in between.  The movie followed Sensei Dave, who is trying to live a quiet life running his karate dojo in the suburbs when he’s drawn into a competition with the evil martial artist Tiger, who moonlights as a hitman for the mob.  The Karate Rap got an update and was featured in the movie along with other wonderfully terrible original songs.  You can check out Sister Sensei on Vimeo and the original video for The Karate Rap below.

Musical Montage: Maxi Priest “It Starts in the Heart”