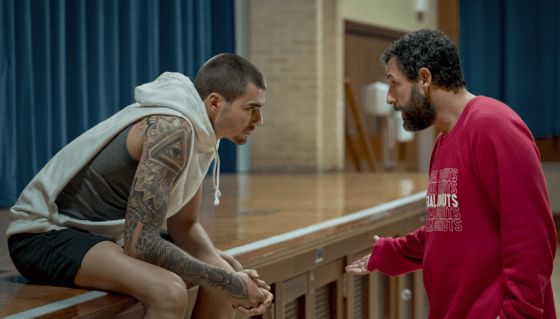 While we wait for Adam Sandler to reteam with the Safdie Brothers for another high-stress drama like Uncut Gems, it looks like fans of serious Sandler can get their fix in June when Hustle debuts on Netflix.  Sandler plays Stanley Beren, a struggling basketball scout for the 76ers who is constantly away from his home in Philly looking for talent.  While in Spain, Beren finds an exception street baller Bo Cruz, played by Juancho Hernangomez, but the team’s owners aren’t interested.  Determined to get the kid a shot, Beren risks everything and goes against his team to get Cruz a chance at the NBA.  Ben Foster, Queen Latifah, Robert Duvall, Jaleel White, and Maria Botto co-star, while Lebron James produced with Sandler. The movie is directed by Jeremiah Zagar, who has done a number of short films and music videos.  Hustle is out on Netflix on June 8th and you can check out the trailer below.

Elsa Pataky is Under Siege in Interceptor (Trailer)