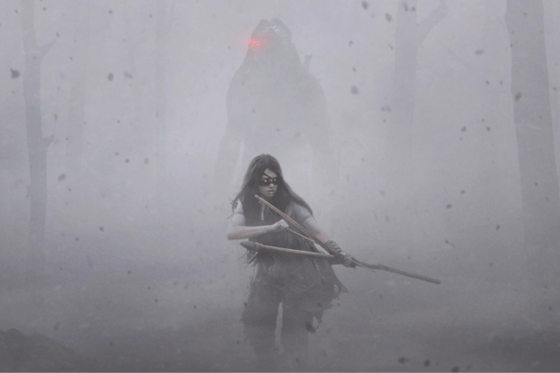 The Predator franchise hasn’t had the best of luck recently, especially The Predator, which was a mess of a movie despite being directed by OG cast member Shane Black.  Based on this teaser trailer, it seems like we might be getting a potentially great Predator movie in August on Hulu with Prey.  Directed by Dan Trachtenberg, who directed 10 Cloverfield Lane and the first episode of The Boys, directs Prey, which is set 300 years ago in the Great Plains.  Naru (Amber Midthunder) is a Comanche warrior who sets out to hunt down a mysterious threat to her tribe but discovers that it is an alien hunter who looks at her as prey.  The two face off in the wilderness with Naru forced to use her skills and tribal weapons against the high-tech gear of the Predator.  One of the best parts of the old Dark Horse Predator comics was putting Predators into weird times, like the Civil War or World War I, and this seems like it’s in that vein and a stripped-down duel between two hunters seems like exactly what the Predator franchise needs.  The movie hits Hulu on August 5th and you can check out the teaser below.