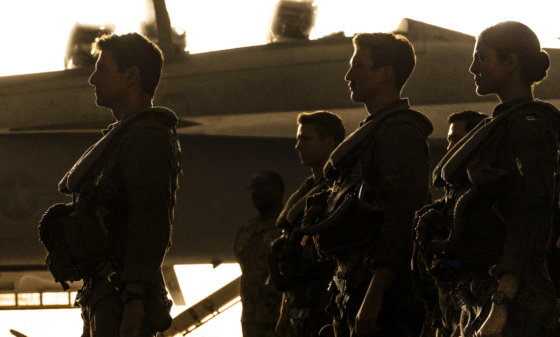 One of the many iconic aspects of Top Gun is its soundtrack, which actually kicked off this entire Musical Montage feature 11 years ago when we highlighted songs like “Danger Zone” and Harold Faltermayer’s iconic score.  It remains to be seen if this weekend’s Top Gun: Maverick will have as iconic a soundtrack but they’ve recruited Lady Gaga to try with her power ballad, “Hold My Hand”.  Berlin’s “Take my Breathe Away” is probably the closest analog to “Hold My Hand” from the original movie and the music video was directed by Top Gun: Maverick’s Joseph Kosinski.  Gaga wears the original Maverick bomber jacket throughout the video and the black and white combined with Gaga hanging around fighter jets also recalls the video for “Top Gun Anthem” by Harold Faltermayer and Steve Stevens.  The song debuted at #82 on the Billboard charts, but there’s definitely a chance it could spike up after the movie comes out this weekend.  Check out the video for “Hold My Hand” below.