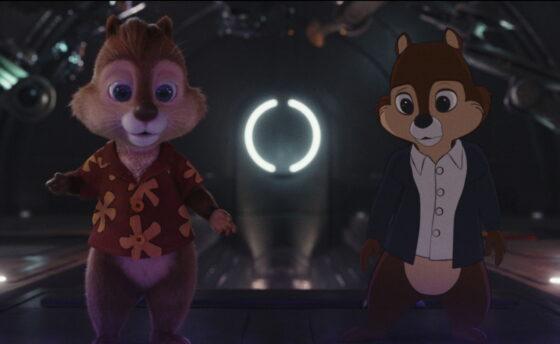 Beloved to almost every 90s kid, The Disney Afternoon has already seen one fantastic reboot in the former of the excellent new Ducktales and now Chip N Dale gets their shot at a comeback with the absolutely hilarious and thoroughly meta movie Chip N Dale: Rescue Rangers.

Basically the spiritual successor to Who Framed Roger Rabbit?, Rescue Rangers finds Chip (John Mulaney) and Dale (Andy Samberg) estranged 30 years after their 90s cartoon was canceled.  The world is one where cartoons and humans live side by side and characters like Chip and Dale are just actors in whatever project they appear in.  Dale has gotten “CG Surgery” and spends time trying to cash in on Rescue Rangers nostalgia at fan conventions while Chip has become a lonely insurance salesman.  When Monterey Jack (Eric Bana) calls them both saying he’s in trouble with some dangerous criminals and then disappears, the duo reluctantly team back up to find their friend.  Mulaney and Samberg do a great job putting a different spin on Chip and Dale and putting their trademark style on each (Dale has big Jake Peralta energy) and the movie also takes the time to make them fleshed out characters with real issues that led to their falling out and they’ve been holding onto for 30 years. The decision to make one 2D and one CG is good for some jokes but it doesn’t really play into things as much as you would expect (maybe Chip can do something or fit somewhere that Dale can longer get into?). The rest of the supporting cast is a ton of fun including Will Arnett, JK Simmons as a claymation police chief, Kiki Layne as a human cop, and Rescue Ranger’s fangirl, and Seth Rogen and Da’Vone McDonald as the main villain’s henchmen, with Rogen, especially having some great funny moments and jokes that play on his many other voice acting roles.

The biggest joy of Chip n Dale Rescue Rangers is the number of cameos and jokes related to animation and Hollywood.  It’s mind-boggling to try and figure out how Disney managed to wrangle not just internal cameos for properties they own but so many characters from other, rival studios.  Paramount especially has some of the best moments with their characters, including the one who has been all over social media, Ugly Sonic (voiced by Tim Robinson), who has some scene-stealing moments and whose entire existence is making fun of how shitty and terrible he is.  There are also tons of background jokes and stuff that will make you definitely want to pause and try to find everything.  The movie isn’t all just empty cameos and references though as tons of humor and situations are character based and play off the timing of Mulaney and Samberg or just the general weirdness of human/cartoon interactions and lots of jokes about reboots and what a “Rescue Rangers” reboot would be.  The movie also pays tribute to all aspects of animation with everything from sock puppets to anime characters to puppets appearing and there are great jokes about certain styles of animation, like Robert Zemeckis’ bizarre dead-eyed characters, one of which is Seth Rogen’s henchman Bob.  Chip N Dale Rescue Rangers is definitely on The Lego Batman side of meta-comedy and less the empty references and nonsense of Space Jam: A New Legacy.

Chip N Dale Rescue Rangers is an absolutely hilarious and delightful movie that has plenty of jokes and references for fans of the original cartoon but expands the scope to a biting and gut-busting take on the Hollywood system and the history of animation in the same way Akiva Schaffer and Andy Samberg previously did with movies like Popstar and the music industry.  It’s more creative and weird than you would expect from a Disney movie and the amount of rival company cooperation is astounding.  If you have Disney+, this is a must-watch.

The Rescue Rangers Are Back On Disney+ In May (Trailer)