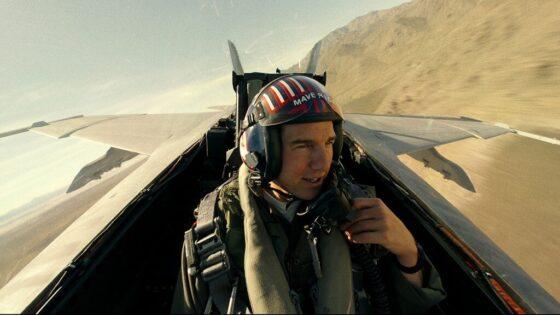 Top Gun: Maverick shattered all kinds of records last weekend over the Memorial Day holiday and it continued to dominate the box office this past weekend with one of the smallest drops between opening and the second weekend in cinema history.

Top Gun: Maverick dropped a minuscule 29% from last weekend, making another $90 million over the weekend and bringing it to $295.6 million domestic and already over $526 million worldwide.  Most movies, especially giant $100+ million opening blockbusters, drop at least 50% from opening weekend to the second weekend.  Top Gun: Maverick had basically no new competition over this past weekend but word of mouth was also sky high, with the A+ Cinemascore from opening day audiences and glowing reviews from almost every major movie critic.  It will have competition from Jurassic World: Dominion this coming weekend but if it remains strong, it will easily be one of the biggest movies of the summer and the entire year.  It’s currently the third highest grossing film of 2022 domestically and the fourth biggest movie worldwide for 2022.

Doctor Strange in the Multiverse of Madness remained in 2nd place with another $9.2 million, bringing it to $388.7 million domestic and just over $909 million worldwide, making it the biggest movie currently domestically and worldwide for 2022.

The Bob’s Burgers Movie saw a fairly steep drop from last weekend, staying in third place but dropping 64% with another $4.5 million.  It now has $22.2 million domestically for two weeks out.

The weekend’s smaller limited releases just barely made it into the top 10 with David Cronenberg’s Crimes of the Future making $1.1 million in 773 theaters and Watcher from IFC Midnight making $826,775 in 764 theaters.  Sony also showed how utterly out of touch they are as they re-released Morbius back in just under 1,000 theaters following a few weeks of memes and shitposts but the movie only pulled in another $310,665 or about $300 per theater for the weekend.

Top Gun: Maverick was still the Per Theater average champion for the second weekend in a row, pulling in $18,951 in each of the 4,751 theaters it was playing in.