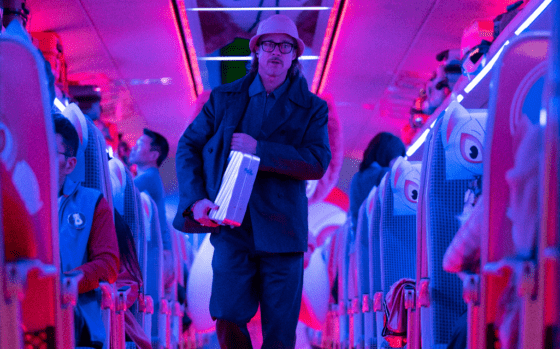 David Leitch, who previously brought us Hobbs & Shaw, Deadpool 2, and Atomic Blonde, is back in August putting Brad Pitt through the worst train ride in history in Bullet Train.  Pitt plays an assassin codenamed Ladybug who believes he suffers from perpetual bad luck and wants out of the assassin lifestyle.  Taking what is supposed to be an easy job from his handler Maria Beetle (Sandra Bullock), Ladybug finds himself up against a colorful group of fellow assassins, who all want the metal briefcase he was instructed to pick up and take aboard the bullet train.  Aaron Taylor-Johnson, Joey King, Brian Tyree Henry, Andrew Koji, Hiroyuki Sanada, Michael Shannon, Bad Bunny, Zazie Beetz, Logan Lerman, and Karen Fukuhara co-star.  The movie looks like it will be a ton of fun with lots of action mixed with humor and it definitely has kind of Smokin’ Aces vibes but with John Wick-style action.  The movie is out on August 5th and you can check out the new trailer below.