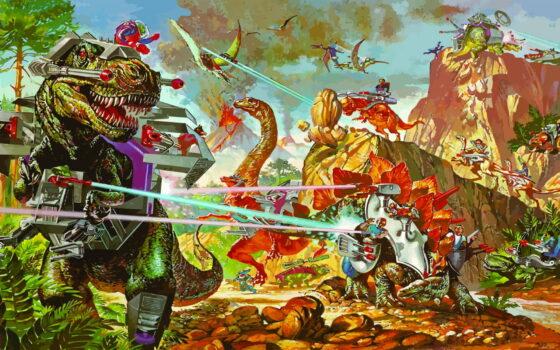 The dinosaurs of the Jurassic Park/World franchise are pretty awesome but they would arguably be even more awesome if they were loaded up with lasers and missiles, which was the premise of the late 80s cartoon and toy line Dino-Riders.  Produced by Tyco, the toyline featured extremely detailed dinosaur figures that could be loaded up with all kinds of weapons and technology and paired with the smaller human Dino-Riders, of which there were two factions; the heroic Valorians and the evil Rulons.  To promote the toys, an animated series launched in October of 1988 as part of the Marvel Action Universe but it only lasted for 14 episodes despite having comic legend Gerry Conway (co-creator of The Punisher) behind the series and featuring the voice talents of Peter Cullen, Frank Welker, Rob Paulsen, Stephen Dorff, Cam Clarke, and Charlie Adler.  The toyline continued for a few more years after the cartoon ended and the dinosaur figures were eventually repurposed by the Smithsonian, who sold them in their gift shop under the Dinosaur Collection label, obviously without any of the lasers and fun accessories of the original line.  You can check out the first episode of the animated series below.