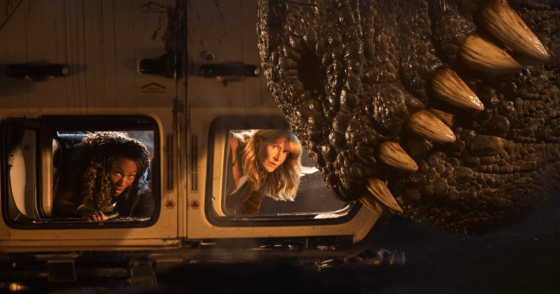 Jurassic World: Dominion took the top spot at the box office as expected but Top Gun: Maverick continued to have huge legs and is on pace to definitely defeat Doctor Strange, and possibly every other movie, for the summer.

Jurassic World: Dominion took in $145 million over the weekend, which makes it the lowest opening of the new Jurassic World trilogy but still a solid debut.  The movie had opened earlier overseas in a number of markets, including China, and it has a worldwide gross so far of $391.3 million, making it the ninth highest grossing film worldwide for 2022.  It’s not clear how it will fare next weekend as critical reception was abysmal but audiences seemed to mostly enjoy what they saw, giving the movie an A- Cinemascore, so we’ll have to see how it does against Lightyear coming up.

Top Gun: Maverick ceded the top spot but still had incredible legs, only dropping 44% from last weekend and taking in another $51.8 million.  It now has $395.2 million domestically and $748.8 million worldwide, making it the third highest grossing film of 2022 behind Doctor Strange in the Multiverse of Madness and The Batman.  There’s no doubt that it will surpass Doctor Strange domestically and it will pass The Batman worldwide, the question is does it have enough to reach almost a billion worldwide to top Doctor Strange’s $930 million total?

Speaking of Doctor Strange in the Multiverse of Madness, it dropped to third place with another $5.2 million, bringing it to $398.1 million domestic and the aforementioned $930+ worldwide.

The Bad Guys and The Bob’s Burgers Movie rounded out the top 5, with the former closing in on crossing $100 million domestic with a current total of $91.8 million.

Further down the list, Firestarter had a strange surge, jumping up 733% from last weekend with $833,340 in 150 theaters.  We don’t know if this is the case but sometimes this happens if a movie hits drive-ins, which do double features, so Firestarter may have been attached to a possibly more popular partner movie, which boosted its numbers.

Jurassic World: Dominion also took the Per Theater average with $31,026 in each of the 4,676 theaters it played in over the weekend.