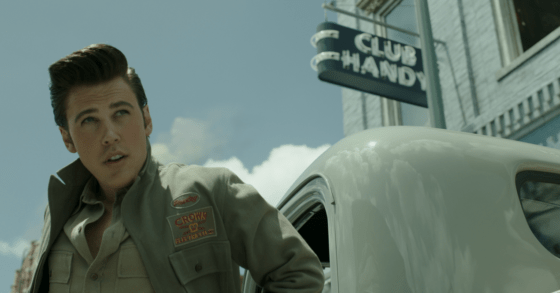 It was a close race at the box office this past weekend but the King of Rock and Roll managed to eke out the win against the still high-flying Tom Cruise.

Elvis took in $31.2 million over the weekend, which gave it just a few million more than Top Gun: Maverick, which is still going strong in second place.  Early reports had the movies in a dead heat based on Sunday estimates but Elvis managed to pull ahead when the final numbers came in.  That tops the recent musical biopic Rocketman but is well below Bohemian Rhapsody, which brought in just over $50 million on its opening weekend.  It’s the second best opening for direct Baz Luhrmann, behind The Great Gatsby, which made $50 million on its opening weekend back in 2013.  Worldwide, Elvis has made just over $51 million so far.

As mentioned, Top Gun: Maverick almost returned to the top of the box office in its fifth weekend of release, making another $29.6 million.  It has over $520 million domestic and has now crossed over $1 billion worldwide, the first Tom Cruise movie to break that mark, and is the biggest movie worldwide for 2022, passing Doctor Strange in the Multiverse of Madness, which is sitting in second place now with just over $943 million.

Jurassic World: Dominion, after topping the box office for the last two weeks, dropped 55% from last weekend and took third place with $26.7 million.  It now has just over $303 million domestic and $748.5 million worldwide.  It is currently the 4th biggest movie domestically and worldwide for 2022.

The Black Phone and Lightyear rounded out the top 5.  The Black Phone was a mid-tier opening for Blumhouse, with its $23.6 million opening putting it between The Visit and Insidious Chapter 3 and it’s one of the bigger recent openings, only topped by Halloween Kills and The Invisible Man in the last three years.  Lightyear seemingly continues to have a bad time at the box office, dropping a pretty steep 64% from last weekend’s already disappointing opening and making another $18.1 million, putting it at $82.2 million for two weeks out domestically and $152.8 million worldwide.

Further down the list, another Indian film had a strong debut with Jugjugg Jeeyo taking eighth place with $604,000 in just 318 theaters.

The per theater average went to Marcel the Shell with Shoes On, which played in just 6 theaters over the weekend but took in $28,268 in each theater.