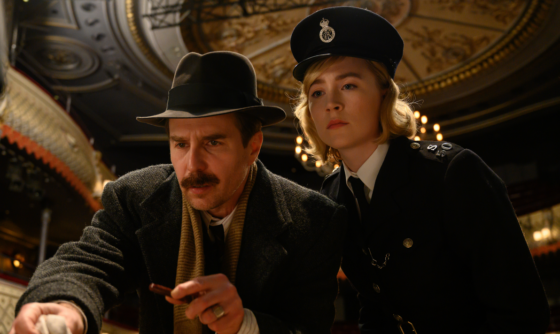 The whodunnit? genre has had something of a resurgence in the last few years between Knives Out and its upcoming sequels, the memeable insanity of Kenneth Branagh’s Poirot adaptations, Hulu’s Only Murders Left in the Building, and now See How They Run, hitting theaters in September.  Sam Rockwell plays the world-weary Inspector Stoppard, who is paired with an eager young rookie, Constable Stalker (Saoirse Ronan), to investigate the murder of a Hollywood film director (Adrian Brody), who was shooting an adaptation of a popular stage play in London’s West End.  The range of suspects includes David Oyelowo, Ruth Wilson, Harris Dickinson, Shirley Henderson, Sian Clifford, Jacob Fortune-Lloyd, Reece Shearsmith,  and Charlie Cooper and it definitely seems like it has some of that Knives Out energy mixed with some Wes Anderson.  The movie is directed by Tom George, who previously directed BBC shows This Country and Defending the Guilty.  See How They Run is out on September 30th and you can check out the trailer below.