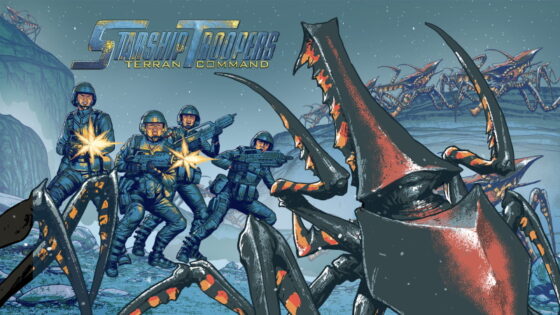 Geared up and ready for a bug hunt, the Starship Troopers are dropping into Arachnid-infested colonies and taking back control, one trooper at a time. Developed by The Artistocrats and published by Slitherine Software, Starship Troopers: Terran Command is an RTS game that is set in the 1997’s movie adaption of the classic sci-fi novel Starship Trooper. The player takes up the role of a commander of the mobile infantry, the main fighting force of the Federation. It’s the job of the mobile infantry to secure positions, root out Arachnid hives and fight to the last man standing if needed. The command is assigned to regain the order of the desert planet Kwalasha and stomp out any Arachnid resistance. It will take smart planning, superior weaponry, and overwhelming manpower to gain total victory for humanity.

The campaign mode consists of 18 levels that lead the mobile infantry thru barren landscapes, underground tunnels, and ruined cities. A once thriving colony on Kwalasha is now crumbling under the growing Arachnid enemies. Some missions will have the player scout the areas for resources or defending locations. Others will be securing mining operations or rescuing top officials. But the enemy knows the planet a lot better than you, and every cave and corner can hide vicious bugs that can swarm the troopers.

Terran Command focuses on basic combat tactics than harvesting resources. There are no complex gathering systems or technology trees to unlock or import structures to build. Most missions have a certain population capacity that determines how many units can be deployed.  Soldiers like riflemen, rocket troopers, combat engineers, and snipers cost manpower. These units handle differently in certain situations and must be placed in ideal spots. Riflemen are the basic units that work best in large numbers, rocket troopers can take out heavily armored enemies faster and the combat engineers can build defensive and can dominate in choke points. Each unit will gain experience in combat, making them more efficient and better skilled for tougher fights. Whenever a member of a unit is killed, they can replenish the lost soldier at radio stations or by special radio troopers to call in a dropship. But if the whole unit is lost, any replacement will start back at the basic ranking also. 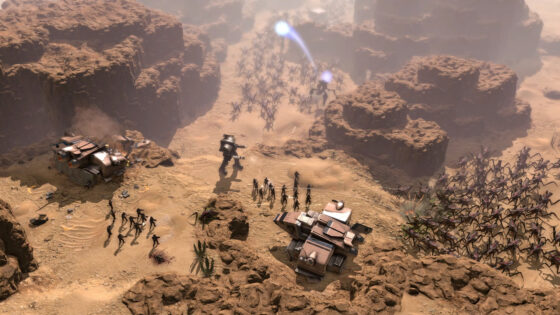 Having powerful units doesn’t mean a whole lot if they can’t attack correctly. Terran Command has a combat system that only lets these soldiers attack if they have a clear line of sight to the enemy. If they are blocked by obstacles and friendly units, the soldiers will be suppressed and stop attacking, even if enemies are chomping at them. Most enemies are deadly up close and will try to rush soldiers quickly. The riflemen especially have issues bunching up and slowly spread out, wasting precious seconds to push back enemies. There are no quick commands that make the squad take a tactical position or redirect their focus if they can’t fire at that exact moment. This gets super frustrating when you move multiple units and have to micro-manage each unit’s ideal position. The best strategy during a fight has been to only move one unit at a time in firefights to ensure someone is always attacking and giving you enough time to reposition.

There is also a special technology limit that controls how many advanced structures and weaponry can be used. Combat engineers can build different turrets that can protect key locations and can be destructed to move around. These are great to boost defensive positions and are vital against large attacking swarms. On later missions, hulking battle suits known as Marauders can be called down, which can make short work of the enemies. They are slow but powerful that are like three soldier units in one. 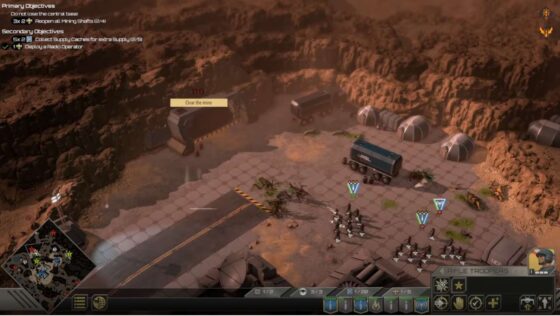 Throughout some missions, there will be lairs that must be closed off to stop the horde of enemies from continuously spawning. There will be indicators that show the strengths of the lairs and when the next wave of enemies will be generated. Getting to the lairs will be challenging, enemies will usually have multiple units guarding the area. Soldier units will have to be sent into the lairs to destroy them from the inside. Based on the lair’s strength and the soldiers’ abilities, it will take a few moments to get this task done. Clearing lairs adds a fun tense mechanic to risk to stop counterattacks from happening. This usually means venturing out from the safety of bases or good cover to draw out the enemy. Early levels will have the basic riflemen and combat engines doing most of the heavy fighting, sending out countless soldiers to gain a footing. More advanced units, like the E-Pulse riflemen, make it easier to clear out the hordes, but still, require smart tactics to ensure they last on the battlefield.

The presentation does deliver on the Starship Trooper fan service of the game closely follows the 1997’s movie’s with its militant propaganda new reports and a sense of governmental oversight. The character models are good, but not ultra-detailed enough to zoom in on. The enemies’ models are also very movie-accurate and their swarms look menacing. They also splatter nicely as you cut their numbers down. The sound design is fine, and with any RTS, the soldier lines do get repetitive. The epic orchestral score is a nice touch to make combat feel glorious, even when you have to retreat from the enemies.

It has been a long time coming since movie fans and gamers got the chance to play out the insane bug-fighting action and Terran Command is a decent attempt to capture that experience. It may not be the most challenging RTS game, but you can modify the difficulty to be balanced to your play level. The RTS mechanics are simplified systems that let the player think quickly and act fast. There is not a lot of combat depth to the gameplay, it mainly encourages the player to utilize the surroundings with some cautious planning. The game does make it feel great to hold your ground against large enemy numbers. At times you feel unstoppable with your squad of Elite riflemen, then suddenly your jaw drops when they are taken out by a Tanker Bug that waddles into view. But you can brute force many situations by calling reinforcements. There are a few levels that force the player to manage just a small squad and that’s where it counts to see if you have good tactics. There is a lot of multiplayer or the ability to turn your hand as the Arachnid force. There are extra challenge missions to take, but it kind of feels like the rest of the campaign mode. It’s definitely meant for fans first than the average gamers, but The Artistocrats are on the right track to building a solid series if they make tweaks to the systems. Terran Command lacks some of the modern features, but it makes up for it in pure bug action fun. Starship Troopers: Terran Command was released for PC on June 16th.