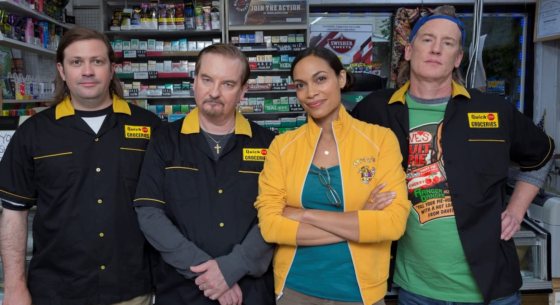 In some sort of development since 2012, the third installment in the Clerks series finally arrives in September from director/writer/co-star Kevin Smith.  Picking up from the end of Clerks II with the Quick Stop/RST Video being rebuilt following a fire and Dante and Randall resuming their respective roles in each store, Clerks III finds the guys mostly back to their usual grind until Randall (Jeff Anderson) has a heart attack.  After his hospital stay, Randall is inspired to make a movie based on the convenience store, in a meta nod to the first Clerks, and enlists Dante (Brian O’Halloran), Elias (Trevor Fehrman), Becky (Rosario Dawson), Jay (Jason Mewes) and Silent Bob (Kevin Smith) to help.  It looks like there’s going to be a lot of jokes and commentary about the series as a whole and especially the first movie along with the usual raunchy, pop culture humor the series is known for and lots of cameos from Smith’s famous friends.  The movie has a special premiere on September 4th in Red Bank, NJ before a wide release on September 13th and you can check out the trailer below.