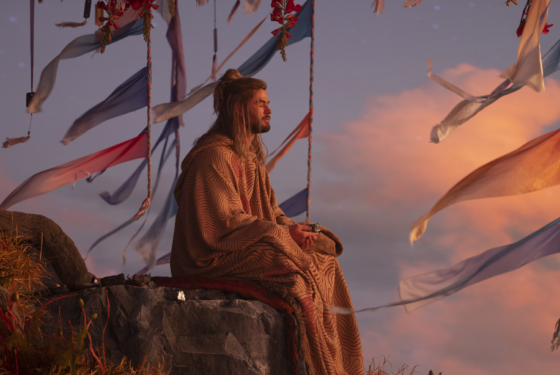 With his third solo outing, Thor easily took the top spot at the box office, sending last week’s champions, the Minions, down to second place.

Thor: Love and Thunder took in $143 million over the weekend, which is the best opening of the three solo Thor movies and the 12th best opening for the entire MCU between Guardians of the Galaxy Vol. 2 and Iron Man 2.  It’s already the 8th highest-grossing film domestically of 2022 and it’s just outside the top 10 at #11 worldwide with $302 million.  Not counting Avengers movies, it’s also the biggest opening ever for Chris Hemsworth as the star.

Minions: Rise of Gru dropped 57% to second place with another $46.1 million, bringing it to $210.6 million domestic for two weeks out and over $400 million worldwide.  It’s currently the 5th biggest movie domestically for 2022 and the 6th biggest movie worldwide.

Top Gun: Maverick remains in the top 3 in its seventh weekend of release, bringing in another $15.5 million and taking its domestic total to over $597 million and $1.14 billion worldwide.  On the all-time domestic box office list, it currently sits at #12 between Incredibles 2 and 2019’s The Lion King and it’s 30th if you adjust for inflation, sitting between Incredibles 2 and Pirates of the Caribbean: Dead Man’s Chest.  Worldwide, it’s current #25 between Aquaman and Spider-Man: No Way Home.

Further down the list, despite a minuscule number of theaters, Marcel the Shell with Shoes On has moved into the top 10, taking 8th place with $322,167 in 48 theaters.  If it expands, it could follow fellow A24’s success story Everything Everywhere All at Once, which made waves in limited release before going wide.

Thor: Love and Thunder took the Per Theater average as well this past weekend, making $32,686 in each of the 4,375 theaters it was playing in.