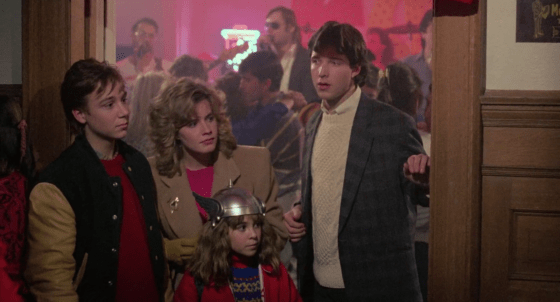 During one of the many misadventures that babysitter Chris Parker (Elisabeth Shue) and the kids she’s watching, Brad (Keith Coogan) and Sarah (Maia Brewton) end up getting into on a wild night through Chicago is ending up in a blues club to escape car thieves.  The bar patrons won’t let the group leave unless they perform a song, so Chris somehow busts out “Babysitting Blues”, recapping everything they’ve gotten into up to that point.  The crowd loves it, lets them leave, and helps by delaying the criminals after the group.  The song was written by pop songwriter Mark Mueller, who would later write songs like “Crush” by Jennifer Paige and “That’s What Love is For” by Amy Grant  Mueller worked with the movie’s composer, Robert Kraft, and blues Albert Collins is part of the band onstage backing up Shue.  Shue performed the song herself and in an interview in 2021 in New York Magazine, she said it was one of the best experiences of her life.  You can check out the scene from the movie below.