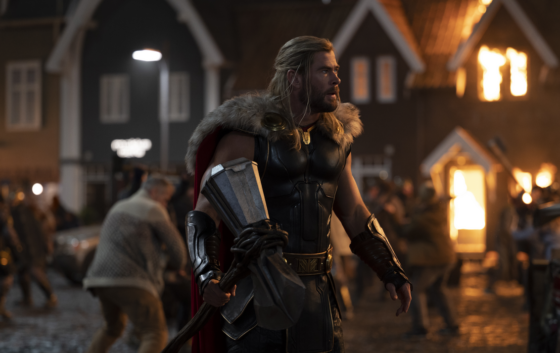 The last time we saw Thor was in Avengers: Endgame but the God of Thunder is back for his third solo adventure that is mostly fun but is definitely diminishing returns from Thor: Ragnorak.

As explained by the lovable rock creature Korg (Taika Waititi) in an opening montage, Thor (Chris Hemsworth) spent his time after helping to defeat Thanos by getting back into shape, traveling the universe, and trying to figure out who he is post-Endgame.  After spending some time with the Guardians of the Galaxy, Thor learns about a killer named Gorr (Christian Bale) who is traveling the universe killing gods and who has seemingly made the remaining Asgardians his next target.  Returning to Earth with Korg, Thor reunites with Valkyrie (Tessa Thompson), the king of New Asgard, and Jane Foster (Natalie Portman), who now wields the reconstituted Mjolnir and is now Mighty Thor.  The group sets out on a rescue mission when Gorr kidnaps the children of New Asgard and escapes to the Shadow Realm, a region of the universe so dark that color is basically nonexistent.  The plot is pretty typical for the MCU with a big cosmic McGuffin to find, some side quests to somewhat interesting locales, like the god hangout Ominipetence City, and lots of jokes and action along the way.  The thing about Love and Thunder though is that a lot of it feels like a pale imitation of Ragnorak and it obviously lacks the initial surprise and fun of that massive tonal shift.  We now know what makes characters like Valkyrie and Korg tick and there’s not really any new character development for them, or really any of the characters, and Thor feels like he actually regresses a bit, feeling dumber and more reckless and almost approaching Kevin from Ghostbusters: Answer the Call levels of dumb at times.  A lot of the jokes still work but it definitely feels more labored and drawn out to get to the punchlines, like improv that isn’t really getting anywhere.  There’s also a mismatch of tones that takes away from actually great plotlines like Jane’s struggle with cancer and the affect Mjolnir has on her and pretty much everything with Gorr, who is a legitimately horrifying villain thanks to an unhinged Christian Bale performance that goes from serious to maliciously comical at the drop of a hat.  If the movie toned down the goofy jokes a tad and took the time to take things a little more seriously, this could have been a much more solid entry in the MCU.

The action and visual effects are something of a mixed bag in Love and Thunder as well.  Since Gorr’s main power is conjuring shadow beasts, a lot of the fight scenes are shot in the dark with murky visual effects that make it hard to see what is happening at times.  On the other hand, sequences like the Shadow Realm are some of the most visually stunning imagery in the entire MCU. Omnipotence City should have probably been a stand-out location and there’s some fun stuff during that sequence, including a truly absurd Russell Crowe as Zeus, but the way it’s designed isn’t too different from the stuff we’ve seen before from say, the TVA headquarters in Loki.  Speaking of the TV side of things, it’s not a huge complaint but it does feel a bit odd that in a movie so focused on the various gods across the MCU universe that there isn’t mention of Khonshu or the other Egyptian gods.  Even if Love and Thunder take place before the events of Moon Knight (which I don’t know if it does or not), Marc Spector is still running around as the avatar of a god.  It’s just another way that the TV and movie sides of the MCU, while much closer than they were previously, are still not fully gelling together.

Thor: Love and Thunder is fine but it’s a fairly inessential entry into the MCU.  If you wait to see it on Disney+, you won’t be missing much by not seeing it in theaters.  The surprise of Thor: Ragnorak is also gone and this movie repeats a lot of beats and style from that movie to somewhat diminishing returns and it could have been much better if the goofy humor was toned down a notch or two.  It’s a perfectly delightful way to spend two hours but it probably isn’t going to have much impact on the MCU going forward and it might be the point where the MCU’s style of humor might finally be too much for some fans.

The Thors Battle Gorr the God Butcher in Thor: Love and Thunder (Trailer)

Thor Rethinks Who He Is in Thor: Love and Thunder (Trailer)