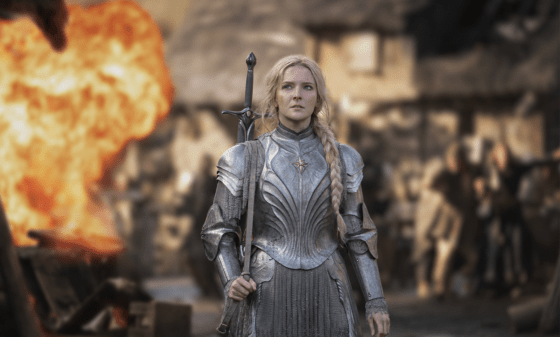 Amazon is going all out with their new Lord of the Rings series, The Rings of Power, which debuts on Prime Video in September.  Set in the Second Age of Middle-Earth, which is thousands of years before The Hobbit and The Lord of the Rings saga, the show follows the rise of Sauron and the forging of the Rings of Power and the One Ring, leading to the Last Alliance of Elves and Men and their siege of Barad-dur that saw the end of Sauron’s physical form and the loss of the One Ring for another two thousand years.  The show stars Morfydd Clark as a younger Galadriel, who is an Elven warrior at the time of the series and one of the few people concerned about the evil growing in Middle-Earth.  Charles Edwards plays Celebrimbor, the Elf who forges the Rings with Robert Aramayo playing Elrond and Maxim Baldry playing Isildur.  Cynthia Addai-Robinson, Owain Arthur, Nazanin Boniadi, and Ismael Cruz Córdova co-star, and the show was developed by JD Payne and Patrick MacKay.  The visuals are pretty stunning, which is what you get when you spend over $465 million on the first season, although a lot of the sets, props, and costumes will be used in later seasons, making those seasons a bit less expensive.  The series begins on September 2nd and you can check out the trailer below.