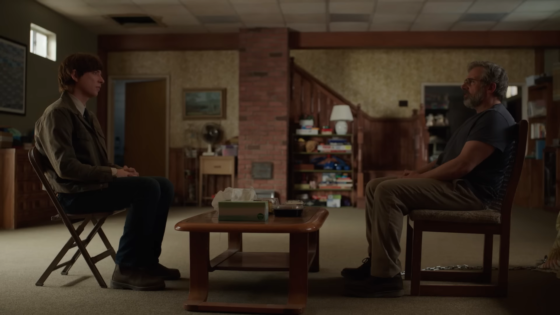 Coming to Hulu via the FX on Hulu label, Steve Carell plays a therapist forced against his will to treat a serial killer in The Patient.  Carell plays therapist Alexander Strauss, who begins treating a patient named Sam Fortner, played by Domnhall Gleeson.  Fortner reveals himself to be a serial killer and kidnaps Strauss, chaining him up but continuing to seek therapy.  Strauss has to figure out how to get out of his predicament and stop Fortner’s killings before he becomes a victim himself.  Linda Emond, David Alan Grier, and Andrew Leeds co-star, and the show was created by Joel Fields and Joe Weisberg, who previously brought us the utterly incredible The Americans on FX.  The show will be 10 episodes, with the first three episodes dropping on August 30th and then the rest dropping weekly after that.  Check out the trailer below.