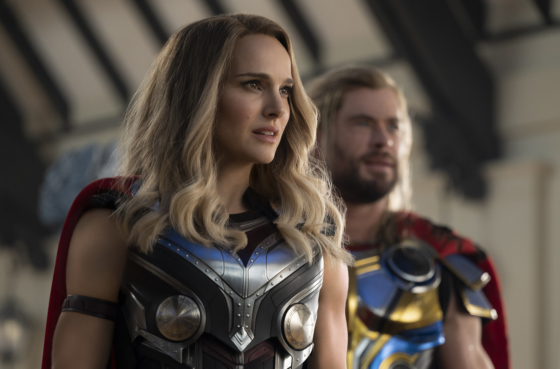 Thor: Love and Thunder managed to stay at the top of the box office for its second weekend of release but took a steep fall from last week’s opening.

Thor: Love and Thunder took in another $46.6 million over this past weekend, which is a 68% drop from last weekend.  The movie has $233.9 million domestically and just under $500 million worldwide.  Thor: Ragnorak only had a drop of 53.5% but also didn’t have to deal with the lingering effects of a pandemic (Los Angeles is seeing a massive surge in cases currently).  Black Widow, Spider-Man: No Way Home and Doctor Strange in the Multiverse of Madness all also had second-weekend drops of over 65%, although Spider-Man and Doctor Strange opened higher than Thor.  It’s not 100% clear what this means for the MCU right now.  A number of their recent movies have had more mixed audience reactions but No Way Home is one of the biggest movies of all time and Multiverse of Madness is close to a billion worldwide, so financially, they are nowhere close to panic levels yet.  If the steep drops and mixed reactions continue though, there might be a need to refocus or figure out what audiences aren’t fully connecting with in Phase 4.

Minions: The Rise of Gru remained in second with another $26.8 million, putting it at $263.4 million domestic and over $533 million worldwide.  Rise of Gru has already topped the first Despicable Me’s entire domestic run in two weeks and will shortly top it worldwide.  The current highest grossing Despicable Me franchise movie worldwide is the first Minions movie, which made $1.15 billion worldwide and Rise of Gru is following almost the exact same trajectory as Minions 17 days into release, so if it keeps on track, it will cross the $1 billion mark before its theatrical run is over.

Where the Crawdads Sing opened above expectations with $17.2 million and third place.  The book adaptation is drawing in massive amounts of female audience members, who most likely read the book and gave the movie version an A- Cinemascore.  The movie didn’t earn great critic reviews, getting a 34% on Rotten Tomatoes, but if the audiences who are going are liking it and recommending it, it could remain a strong counter-programming summer pick against the likes of the bigger blockbusters, like Thor and Minions.

Top Gun: Maverick and Elvis rounded out the top 5, with the latter crossing over $106 million domestic and just over $186 million worldwide.  Top Gun: Maverick is now the #22 biggest movie worldwide of all time, behind Iron Man 3 and ahead of Minions.

Opening in a soft sixth place was Paws of Fury: The Legend of Hank, which probably should have rethought opening so close to Minions.  The movie made $6.2 million domestic with no worldwide markets yet.  Further down the list but still opening in the top 10 was Mrs. Harris Goes to Paris, playing in 980 theaters, it took ninth place with $1.9 million.

Thor: Love and Thunder kept the Per Theater average as well, with $10,659 in each of the 4,375 theaters it was playing in over the weekend.