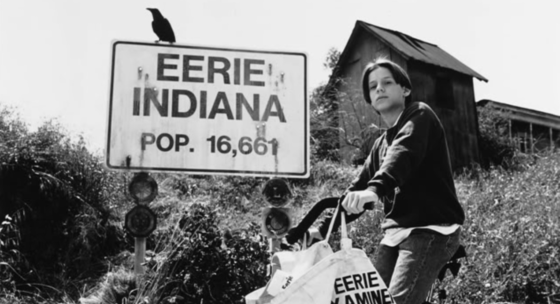 Before stuff like Stranger Things or Gravity Falls, Marshall Teller (Omri Katz) and his friend Simon Holmes (Justin Shenkarow) were investigating the bizarre occurrences in Eerie, Indiana.  Originally airing on NBC in 1992, the show ran for 1 season before being canceled, with the final 19th episode not airing until the show was syndicated to The Disney Channel in 1993, where it ran continously in reruns until 1996.  In 1997, the show jumped networks again, becoming a Saturday morning series for Fox and running from January to September of 1997.  The show developed a new cult following of younger fans and Fox commissioned a totally new series, Eerie, Indiana: The Other Dimension, which followed an alternate universe version of Marshal and Simon named Mitchell and Stanley, which ran for 15 episodes in 1998.  Both shows shared similarities to contemporaries like Twin Peaks or The X-Files, as the boys dealt with urban legends that turned out to be real, aliens, ghosts, and other strange phenomena.  Their goal was to gather evidence and convince everyone that all the strange things that were happening were real, as the rest of the town was either in on the conspiracy or ignorant to what was happening.  The legendary Joe Dante was a creative consultant on the series and the show featured many homages to classic horror movies.  You can check out the first episode of the original series below, Foreverware, where Marshall and Simon have to save Marshall’s mother from being sucked into a cult-like group of women who seal themselves and their children in giant Tupperwareesque containers that extend their life.