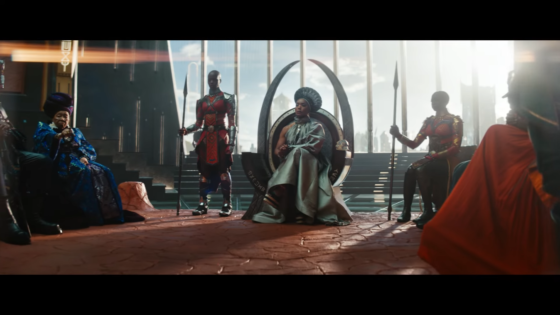 Marvel was back in full force at SDCC 2022 with the first trailer for Black Panther: Wakanda Forever, a new look at next month’s She-Hulk, and the roadmap for their plans for the next few years.  Marvel revealed movies and shows going all the way to 2025, covering the rest of Phase 4 of the MCU and going into Phase 5.

There’s also the Werewolf by Night Halloween Special on Disney+ this fall and a Guardians of the Galaxy Holiday Special this winter.

As far as the rest of this year, we got a new trailer for She-Hulk: Attorney at Law, which stars Tatiana Maslany as Jennifer Walters, the cousin of Bruce Banner (Mark Ruffalo) who becomes She-Hulk and must learn from her cousin how to control her new powers while also becoming the face of her law firm’s new initiative to take on supervillain and superpowered individual based cases.  Her first major case is representing Emil Blonsky (Tim Roth), who battled her cousin in The Incredible Hulk, while also dealing with the villainous Titania (Jameela Jamil).  Charlie Cox is confirmed in this new trailer to be back as Matt Murdock aka Daredevil, who seems to possibly be now wearing a version of his black armored suit from the comics.

Black Panther: Wakanda Forever brings us back to Wakanda, which has lost its king, T’Challa, as the real world lost Chadwick Boseman in August of 2020.  T’Challa’s family and friends, including Ramonda (Angela Bassett), Shuri (Letitia Wright), Nakia (Lupita Nyong’o), M’Baku (Winston Duke), and Okoye (Danai Gurira) try to continue his work and balance Wakanda’s role in the larger world while also dealing with the emergence of Namor (Tenoch Huerta) and the kingdom of Atlantis. Martin Freeman is back as well as Everett Ross and Dominique Thorne, who is playing Riri Williams aka Ironheart, will make her debut before getting her own Disney+ show.  Ryan Coogler returns to direct the sequel.

The MCU Explores the Multiverse With What If? (Trailer)