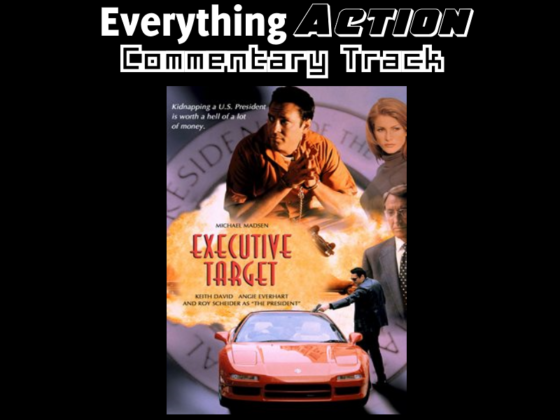 One of the things we like to do here at Everything Action is watching trailers for ridiculous 80s and 90s action movies, most of which went straight to video, and we stumble across stuff like 1997’s Executive Target, which we watched for the latest Everything Action Commentary.  Starring Michael Madsen, Keith David, Angie Everhart, and Roy Scheider, the movie follows Madsen as Nick James, a former stunt driver serving a prison term for drug possession.  He’s broken out from a prison bus by Everhart’s Lacey, who works for David’s Lamar at “Area 55”, and Nick is forced to help the gang of criminals/terrorists complete a series of jobs, culminating in the kidnapping of the President (Scheider) when he arrives in Los Angeles.  Zach and Chris try to figure out why the movie’s score seemingly never stops, what Keith David’s plan is and why it involves a superfluous bank heist, Michael Madsen’s wardrobe, and performance choices, and, most importantly, why the movie’s main selling point only happens in the last 15 minutes.  The entire movie is on Youtube, which is the version below that we watched, and you can sync it up with the commentary to check out this ridiculous 90s gem with the Everything Action crew.

Everything Action Commentary: Next