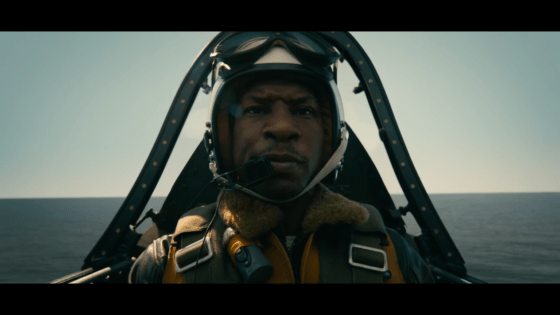 The Korean War doesn’t get the same attention as World War II or Vietnam, especially in the world of film and TV (with the exception of MASH) but one of the most extraordinary stories of the Korean War is coming to theaters in November with Devotion.  Starring Jonathan Majors and Glen Powell (back in the cockpit after this summer’s Top Gun: Maverick), the duo play wingmen Jesse Brown and Tom Hudner respectively in the Navy, who engaged in various bombing runs and other missions during the war.  You can look up the story of what happened and what will most likely be a large part of the movie but the trailer doesn’t really give that away and we won’t either and it’s based on the book by Adam Makos.  The movie was directed JD Dillard, who previously directed Sleight and Sweetheart, and will be in theaters on November 23rd.  Check out the trailer below.